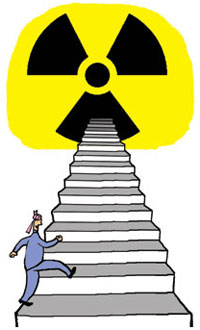 As the high profile visit of US president Barack Obama begins, the two countries have reportedly made a breakthrough in the nuclear deal, it is learnt.

Two critical contentious issues—liability provision in case of a mishap and access to the US to track nuclear materials it supplies India—have stalled implementation of the India-US nuclear deal  till now. A high-level contact group on civil nuclear cooperation was constituted in September, 2014 to resolve the differences.

Sources confirmed that two countries have almost reached a consensus on the nuclear liability issue wherein investors will get relief from the conditional clause requiring payment of huge compensation in case of an accident in a nuclear installation.

However, the matter will not find mention in the joint statement made by Prime Minister Narendra Modi and President Obama.
It is learnt that India is now offering to set up an insurance pool for the purpose of giving cover against liability to companies constructing reactors in the country in case of a nuclear accident.

This is because the Indian side is well aware that any change in existing nuclear liability law needs amendment in Parliament. And the Modi government cannot afford to spoil its first full-fledged budget session beginning in February by bringing in an amendment.

In the absence of any open commitment on nuclear liability, the negotiating parties will clear the other bottle neck—access to nuclear materials to the US, which has been a long-standing demand. US has been demanding to track nuclear material they provide India, fearing that latter can reprocess the waste material and can use for its nuclear arsenal.

India had reservation to give the right on the ground that it is intrusive and questions India’s autonomy. Reactors processing the fuel supplied by the US, will be using technical equipments give by other countries, India had been arguing.

However, it now appears that the two governments are close to an agreement on this. Under it, the US will be authorised to track those reactors built by materials supplied by it, confirmed sources.

Both Modi and Obama had decided to set up a high-level contact group on civil nuclear cooperation in September last month when Modi visited the US. The group has held three rounds of detailed discussions on a range of implementation issues to facilitate the establishment of US-designed nuclear power plants in India.

The implementation of the India-US nuclear deal being worked out during the first regime of former prime minister, Manmohan Singh, had been stalled over the tough provisions in India's Civil Nuclear Liability Act.