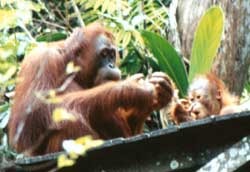 Caged Cruelty
Animals have a right to freedom, even if they are in zoos. At an animal park in Java, investigators found an orang utan kept in a concrete cage with garbage inside. In Bali, a pig tailed macaque was kept in a dingy cage with one leg chained to the bars. Three elephants at a zoo in Java were chained by their legs and able to move only one metre in any direction.

These are the horrifying findings of a report of the World Society for the Protection of Animals (wspa). The report "Caged Cruelty -- An Inquiry into Indonesian Zoos" reveals that 99 per cent of the enclosures "failed to accommodate the basic biological and behavioural needs of the animals". There is either not enough space for the animals or the enclosures are filthy for prolonged periods.

About half of the animals in the zoos do not have sufficient access to water. Investigators made several visits to 10 zoos over five months in 2001.