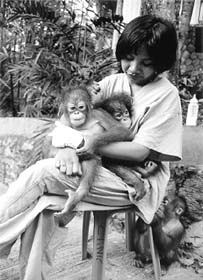 Forest fires have been mainly responsible for wiping out 30 per cent of the orangutan population in the forests of Borneo. The reason for the decline in primate numbers, which presently stands at between 15,000 to 20,000, was the 1997 forest fires in Kalimantan which destroyed 520,000 hectares of land.

This was stated by Aschta Nita Bustani, head of the Semboja Wanariset Orangutan Rehabilitation Project in East Kalimantan province.

He said that because of the fires a large number of orangutans may still be found outside their habitat in the Kutai National Park, east Kalimantan.

"This can be seen from the increasing number of orangutans we have to take care of," Bustani said, adding that the Wanariset rehabilitation centre had rescued seven of the primates lost in residential areas.

"There must be orangutans who stray outside their habitat every week. Often they are caught or killed by villagers," she said.