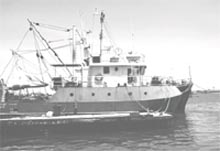 It is a fight that promises to get bitter. But the Indonesian government has launched a determined battle to weed out illegal foreign fishing vessels that authorities claim are stealing heavily from the Indonesian waters and thereby cutting into the livelihood of the local fisherfolk.

"I know the illegal foreign vessels are often backed by well-connected local businesspeople," said Sarwono Kusumaatmadja, minister of maritime exploration and fisheries. "Many are former high-ranking military officers and senior government officials. I will announce their names if they continue their dirty business," he warned. Already the government has mobilised military forces and is preparing to use observation satellites to stop foreign vessels from plundering its waters.

Indonesia is the world's largest archipelago and it also has the largest area of territorial waters -- close to 17 million hectares. Yet, despite its maritime wealth, fishing plays a very minor role in the economy. According to government estimates, Indonesia has the potential to produce 6.2 million metric tonnes of fish each year, but less than 60 per cent of the production capacity is being utilised.

"Most of our fish is stolen by illegal foreign fishing vessels," rues Kusumaatmadja. The government estimates that losses incurred due to illegal fishing in Indonesian waters amount to us $4 billion per year. This is double the country's us $2 billion earned in exports. There have been reports that the illegal fishing activities are carried out under the protection of local government officials who are bribed heavily by the foreign operators.

Despite the seriousness of the situation, the Indonesian government had so far not taken any severe steps to address the issue. It is only lately that Jakarta has begun to view the fishing industry as a potentially lucrative foreign currency earner. But, says Kusumaatmadja, in order that the country may utilise this potential some decisive steps have to be taken to prevent illegal fishing activities.

Voicing similar concerns, D Simanjuntak, a senior official of the North Sumatra division of the Association of Indonesian Farmers, said: "The big foreign vessels sometimes sink the boats of local fisherfolk by ramming into them or shooting at them after being caught stealing fish or destroying fish traps."

Over the last few months, 100 foreign vessels have already been captured by Indonesian authorities. According to a Navy sources, although most of the captured vessels hailed from Thailand, there were others from the Philippines, Taiwan, South Korea and Japan.