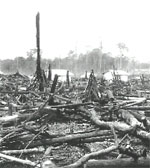 About 70 per cent of forest fires have been estinguished, not just by the rains but because there is nothing left to burn, says Murdiansyah, an official of the East Kalimanthan Environemnt Impact Management Agency, an arm of the environment ministry. The Bukit Suharto National Park, a major tropical forest in Samarinda is dying along with hundreds of thousands of hectares of adjoining jungle. According to data of the Indonesian forestry ministry, the coastal stretch of southeast Borneo, on the edge of the world's second biggest rain forest has received merely 300 milimetres (mm) of rain in the last one year.

Most of the fires set by companies and farmers clearing land have spread across the island. While a United Nations ( un ) team plans to take help of 1,000 people to put out the fires, specialists say there is little humans can do to save the forests. Willie Smits, an adviser to the Indonesian forestry ministry, says that nothing but rain can now stop these fires.

In northern Borneo, even the oil-rich kingdom of Brunei has had little success battling the fires. Smokes from the fires has periodically forced to close schools and the airport. The year seems to be really bad for Borneo. Farmers have run out of rice. Rare animal species have been forced by the fires to move out of jungles. And smoke from the fires has caused health hazards for tens of thousands of people, causing us $6 billion worth of damage.

Indonesia is facing acute food shortage that could affect 7.5 million people in 15 provinces, ajoint report by the un Food and Agriculture Organisation and World Food Program. According to them, the disaster will most likely take place in the next dry season. In that case, humanitarian relief will be badly required by the country to face the challenges.