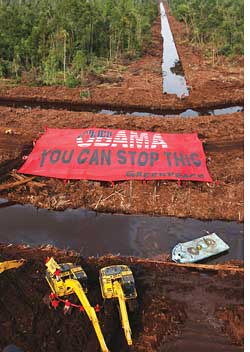 The government of Indonesia believes promoting industries at the cost of forests that support the worlds second highest level of biodiversity, is justified. This was why it recently deported two foreign journalists for covering a Greenpeace demonstration against forest destruction on the western island of Sumatra.

Kumkum Dasgupta, an editor for the Indian daily Hindustan Times, and Raimondo Bultrini, an Italian reporter from the LEspresso weekly newspaper, were picked by the police while visiting a recently-cleared forestland owned by P T Riau Andalan Pulp and Paper, one of Indonesias largest paper companies.

A government spokesperson said they had not sought permission from the provincial authorities to travel in the areas. They were among 15 people deported over the protest; 44 activists have also been detained.