Indonesian forests to be traded on carbon market 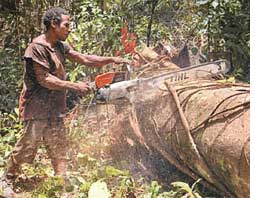 The government of the Indonesian province, Papua, has signed a deal with a Sydney-based firm to establish a forestry-based carbon finance project. The project--which involves conservation of over a million hectares of rainforests--aims to generate up to us $432 million carbon credits over the next 30 years and create "a perpetual financial base for local communities".

The agreement is based on Reduced Emissions from Deforestation and Degradation (redd)--a policy mechanism proposed at the recent climate talks in Bali to compensate tropical countries for safeguarding their forests. The firm, New Forests, says there is a lot of enthusiasm in the carbon market for the project. Logging and forest conversion for agriculture, especially for oil palm and rubber plantations, are an important source of revenue for Papua. In December 2007, the provincial government imposed a moratorium on logging in the hope that the emerging carbon market would offer better returns.