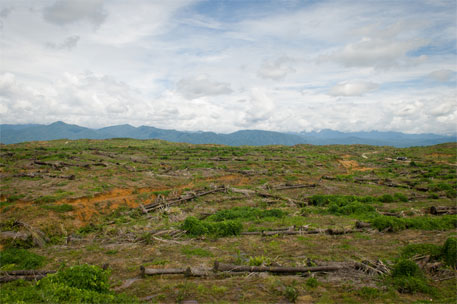 Despite imposing a moratorium on granting new licences for clearing or logging, Indonesia has become a country with highest rate of deforestation across the world. Experts believe that land clearing mostly for oil palm plantations and other agro-industrial land uses is the main reason behind the trend.

Using satellite images, a study published in journal Nature Climate Change, has found that over 12 years, the Southeast Asian archipelago lost six million hectares of primary forests, an area half the size of England. About 40 per cent of the total forest loss occurred within protected forest lands, indicating that illegal land extension may play a significant role in the deforestation.

According to Matthew Hansen, co-author and a professor in the Department of Geographical Science at the University of Maryland in the United States, while the study does not include the fate of the cleared forest, Indonesia’s expanding oil palm plantations are a “significant driver of forest loss”. The report’s authors have also found government figures underestimated the true toll of forest clearing by as much as half.

In conflict with the author’s allegations, in a report published in Asian Scientist, Erwinsyah, a scientist from government agency Indonesian Oil Palm Research Institute has confirmed the “spectacular growth” of oil palm fields in Indonesia but denied that all deforestation can be blamed on oil palm companies. “The sources of oil palm land extension are primarily from villagers’ lands that have been abandoned or from degraded forests that are now being used commercially,” he told SciDev.Net.

The oil palm, from which palm oil is extracted, is native to West Africa but was brought to Asia’s tropical regions by traders during the mid-19th Century. Today, Indonesia and Malaysia produce more than 85 per cent of a global market that is now worth 44 billion dollars.

Reports also suggest that clearing rainforest to make way for plantations has taken a heavy toll on local communities, destroyed natural habitats for endangered species, and become a critical (if underreported) factor in climate change.

Another study, published last month had also revealed that oil palm plantations are not only encroaching on forests, they are also degrading water quality. The study was published in Journal of Geophysical Research: Biogeosciences. The implications for local communities, which depend on streams as a source of water and fish, are potentially significant, said Kim Carlson, lead author of that study.

Huge swaths of Indonesia are burned each year to clear forest for plantations, drastically increasing the release of carbon dioxide. The country is the world’s third worst emitter of greenhouse gases after the US and China.