US had been demanding dilution of provisions that allow nuclear plant operator to sue suppliers for a sum up to Rs 1,500 crore 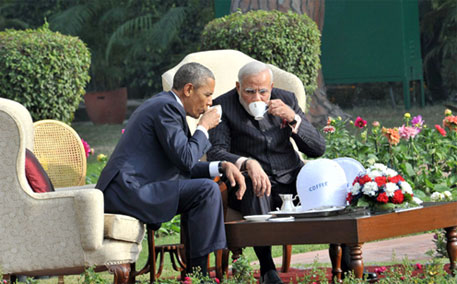 The United States and India may have sealed the nuclear deal on Sunday but it is still uncertain whether the agreement will serve as an energy booster or get mired in legal tangle.

After Prime Minister Narendra Modi and US President Barack Obama issued a joint statement on Sunday, giving the broad outline of the discussions and agreement reached between the two countries, India’s foreign secretary, Sujatha Singh, said: “the nuclear deal is done. We have reached an understanding on liability. We have agreed to expand on clean energy. Both sides will resume talks on the high investment bilateral treaty.” After the sealing of agreement by the leaders, private firms will now negotiate the modalities, say officials.

The implementation of the deal on the ground will now depend on these companies. Besides, the deal will have to in conformity with the law of the land. Emeritus professor at School of Physical Science in Delhi’s Jawaharlal Nehru University (JNU), R Rajaraman, says several minute details of this deal, including what happens about the right to sue the suppliers, are yet to be disclosed.

The right to sue the suppliers was among the three issues blocking the implementation of the civil nuclear deal between the US and India. The other two issues were—US’ demand to track the nuclear materials it supplies to India and the compensation to be paid in the event of an accident under India’s nuclear liability law. Section 46 of the Civil Liability for Nuclear Damage Act, 2010, provides victims with tort remedies: “The provisions of this Act shall be in addition to, and not in derogation of, any other law for the time being in force, and nothing contained herein shall exempt the operator from any proceeding which might, apart from this Act, be instituted against such operator.”

But, these provisions were not accepted by US business players. Under the pressure of private companies interested in doing business in India, the US government was demanding dilution of Section 17 (b) and Section 46 of the Act.

To resolve this crisis, the government of India, under Modi, suggested a solution of creating nuclear insurance pool under which the General Insurance Corporation (GIC), India’s national reinsurer, along with four others will give insurance cover of Rs 750 crore. The remaining Rs 750 crore would be contributed by the Indian government.

However, it has to be seen what happens to US’ reservations regarding the right to sue suppliers. Has the government ceded this right of NPCIL?

Rajaraman says that right of suing cannot be taken away. He says it has to be seen how this deal stands the scrutiny in the court. If somebody files a case, the court will examine its clauses according to land of the law, he says.

The other demand of the US, seeking right to track the materials it supplies to nuclear reactors, was opposed by India, saying it was intrusive, especially because safeguards of the International Atomic Energy Agency (IAEA) are already in place.