Some scientists claim tumours might be formed because cells refuse to die -- and not because they multiply at a high rate. 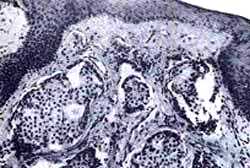 CANCERS occur when some cells break free from the body's control and multiply prolifically. That's the classical view. But now there is a new way of looking at cancer -- it may be because cells are not dying fast enough.

Advocates of this novel view are confident that if death-defying cells could be induced to commit suicide, it may lead to new, biotech cancer cures (Bio/Technology, Vol 11, No 7).

Already, three US companies have announced their intention to develop drugs that would induce apoptosis -- a natural process by which cells die -- to fight cancer.

In many cancers, scientists have found that though the cells do not multiply too rapidly, the tumour continues to grow. To maintain the body's equilibrium, for every cell born, one must die. So, argue apoptosis researchers, if tumour cells are not multiplying fast enough, then there is only one other possibility: they are not dying fast enough.

That cells could be induced to die remained a hypothesis until the late 1980s, when Eugene Johnson of Washington University in Missouri, reversed the conventional notion that the death of cells is a passive process over which no control could be exercised. His experiments on nerve-cells suggested certain genes produced specific "death-inducing" proteins that made cells die. If the synthesis of these proteins was inhibited, it could postpone cell death.

Experiments like Johnson's have triggered a hunt for the putative "death gene" that would code for these suicide-inducing proteins. Another American scientist, Robert Horvitz from the Massachusetts Institute of Technology, hit upon two death genes -- cell death gene-3 (ced-3) and ced-4 -- in a worm called Caenorhabditis elegans. But last year, Horvitz found a third gene -- ced-9 -- that is a pro-life activist that checked the ravages of the two death genes by preventing cells from dying. It thus appears that ced-9 controls the activity of ced-3 and ced-4 and Horvitz found that inactivation of ced-9 allows cells to die in C. elegans.


Researchers now have little doubt that cell death is a fundamental cellular process as widespread among the species as cell-proliferation. But they caution that no one is yet sure what ced-9 or bcl-2 does in a cell.

Information about bcl-2's activities may be coaxed from a class of genes called immediate-early oncogenes. Usually thought to induce cell proliferation, these genes can sometimes also act as death-signals. C-myc is one known example of such a gene.

Bcl-2, researchers find, can inhibit cell death induced by c-myc in the test-tube. Doug Green of the La Jolla Institute for Allergy and Immunology in California, who made this discovery, has suggested a "two-signal" model to explain what the two genes do. "C-myc is the first signal; if the second signal blocks the death pathway, the cell proliferates; if the second signal blocks proliferation, the cell is driven into apoptosis," explains Green.

The activation of the bcl-2 gene may be the second signal that keeps certain tumour cells from dying. This "simple-minded" concept, he says, could be absolutely fundamental to understand how cancer develops.

Apoptosis advocates see cancer as one disease of many they hope to conquer. "This is just the tip of the iceberg," says Green, "stroke, heart disease, autoimmunity -- this is such a fundamental biological phenomenon, that the challenge is to find what it doesn't have something to do with."