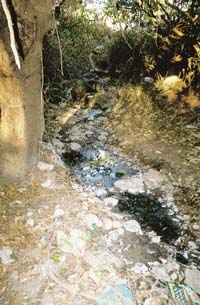 groundwater contamination in Goa's Pilerne industrial estate has led to a drinking water crisis in its surrounding villages. By now, more than 300 residents from Orda and Saipem villages have been affected by drinking polluted water.

The residents get their drinking water supply from a bore-well in Orda and four wells in Saipem village. The wells, managed by the public works department (pwd), are sunk in the vicinity of the industrial area.

In the past few weeks, the residents have been complaining of foul paint smells and oil slicks from the supplied water. They lodged a complaint with the Goa State Pollution Control Board (gspcb) alleging that the erring factories in the industrial area are causing groundwater pollution.

Acting on the complaint, on December 21, 2006, gspcb issued show-cause notices to four industrial units Sandu Pharmaceuticals, G K B Vision Ltd, Surekleen Laundry and Louis Berger Paints. The board also issued a 15-day-notice to two of the industries asking them to keep their discharge levels within the stipulated parameters.

"Preliminary investigations by gspcb showed that the wastewater discharge from the industries were highly acidic in nature. The biological-oxygen-demand of the industrial water was found 1,700 as against the permissible limit of 30, while the chemical-oxygen-demand was 4,500 as against the stipulated level of 250," said Sanjeev Joglekar, the environmental officer of gspcb.

During the investigation, gspcb also found that the septic standard of Sandu Pharmaceuticals was overflowing. "The plant's sewage water might have seeped into the pwd borewell and contaminated it," said Joglekar.

Residents of Saipem further allege that the well-water contains chemical pollutants. But gspcb is yet to come out with a detailed chemical-analysis report.

As of now, as an interim arrangement, pwd is supplying water through tankers and has diverted water supply from another line towards the affected villages. For the residents, its of no relief, as the measure barely caters to the need of a few households in the area.