Industry pollutants in river kills cattle and fishes in Bihar 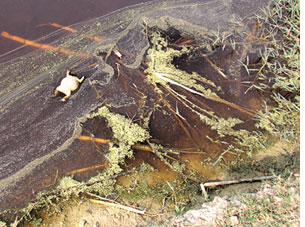 People living along Manusmara river in Bihar's Sitamarhi district dread kala pani --the river water turned dark red or black with effluents. This lifeline now kills their cattle and fish, causes infection and disease and ruins their farms. "People have stopped using river water," says Bhupendra Narayan Singh of Athri village in Runnisaidpur block. It is neither fit for drinking nor for irrigation.

The source of pollution is a distillery unit at Panchhaur village in Riga block, not far from the Nepal border. Though a "zero-discharge mill" on paper, Riga Sugar Mill and Distillery located just 10 metres from the river, discharges wastewater into it at night twice or thrice a week, say people. The impact is visible till Runnisaidpur, 40 km downstream, as the river changes its colour, adds P K Jha, a resident of the adjacent Belsand block.

The river, also known as the old Bagmati, flows in a narrow channel up to Belsand, beyond which it spreads and loses its course, engulfing large chunks of fertile land in Runnisaidpur. The current is negligible here, so discharged effluents tend to accumulate (see map Destructive course). "In the kala pani -impacted area, the yield of sesame, mango and jackfruit is badly affected," says Singh, former senator of Rajendra Agricultural University, Samastipur.

Polluted water has affected 485 hectares (ha) and 100 villages, according to Ramayan Singh, a social activist in Runnisaidpur. Villagers say Riga distillery, with a production capacity of 50,000 litres per day, has been discharging effluents into the river for more than 15 years. And not just into the river. Lal Baba Thakur of Panchhaur and others say the mill also discharges wastewater and carbon black on private agricultural land and on the roadside within a radius of through tankers. This reporter, who followed the river's course from Riga to Runnisaidpur, saw such dumpsites on the way. Clouds of black dust hovering over some; dead frogs, snakes and birds floating in others filled with murky water.

People have complained to the state pollution control board (spcb) several times but to no avail. They also approached the National Human Rights Commission (nhrc), Central Pollution Control Board (cpcb), state government and the Union Ministry of Environment and Forests (moef), but the problem persists. The issue came before parliament when Sita Ram Singh, mp from Sheohar district--through which the river passes before reaching Belsand--raised questions on pollution from the mill in 2005. Next year, the minister of state, moef, N N Meena, listed the distillery for non-compliance.

Ram Das Prasad Singh of Sheohar's Dhankaul village, 14 km from the plant, says the mill operates its pollution-control facilities only when government officials come for inspection but shuts them as soon as they go. People remember the days before the distillery came up in 1995 when they would drink river water without a second thought. Today they are afraid of even bathing in it. Residents of Sonpurwa, Bangahi, Madhopur, Ramnagar, Dayanagar and Rampur villages in Sitamarhi recount incidents of livestock dying after drinking polluted water. G K Jha, a doctor at Belsand, blames the distillery for water-borne diseases like diarrhoea and jaundice. Cases of people and animals getting skin infections after bathing in the river are common, he says.

Another source of infection is effluents-filled ditches dug in agricultural fields and on the roadside. R Patel and Ram Deo Baita of Kharsan in Riga block say the distillery has 16 tankers which illegally dump 60-70 tankers of wastewater every day on 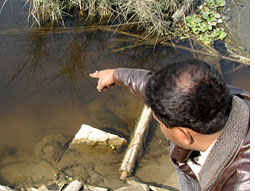 private land through contractors. The company took 5 ha on lease near its Riga unit from Arun Kumar Shisvatava in 2004 for disposing of press mud, distillery water and carbon dust, says Lal Baba, adding that the site has become a source of stench and fugitive dust. Nand Kishore Singh of Kharsan told Down To Earth that in 2006 the mill had dumped effluents in his farm but had been forced to pump it out after police intervened. He said the plant had stopped discharging wastewater along the roadsides but not on agricultural land.

At times it can be fatal as in the case of Baita's son. "My son was a contract worker. In February last year when he was returning after disposing distillery effluents on private land, he probably inhaled too much of the gas emanating from effluents and became unconscious. He fell into he tanker and died. The mill management promised job to a member of his family but no job was given," says Baita.

Nand Kishore also alleges that carbon black from the sugar mill dumped along the roadside gets airborne. Over the years, air pollution has increased manifold around the plant and people are suffering from dust allergy and asthma. Vegetation close to dump sites is covered with a thick layer of black dust.

Signs of pollution are everywhere. Runnisaidpur mla Guddi Devi also admits the mill is polluting the river. But spcb and the distillery management pretend everything is alright. Nand Kumar, regional officer, spcb, Muzaffar-pur, said villagers' allegation that the mill discharges waste water in the river is false. He says the unit is complying with cpcb standards and sourcing groundwater. Villagers, however, say it is totally dependent on the river water.

"Riga distillery is 100 per cent complying with regulatory standards and is equipped with the latest pollution-control devices," adds S N Rao, member secretary, spcb. He denies that the mill is discharging effluents in the river or on agricultural land. How would spcb officials know, when they stay at the company guesthouse while on inspection, Panchhaur residents ask mockingly.

nhrc's intervention also failed to improve conditions. In 2001, following a complaint by Anand Kishor of Pipra village in Riga, nhrc asked the Sitamarhi district collector to give a report on the mill pollution. In 2002, he admitted in his report that the mill had discharged effluents into the river and on agricultural land. He also mentioned skin infections and stomach ailments caused by the contaminated river water. Acting on a similar complaint by Nand Kishor Singh of Kharsan, nhrc directed the district collector to take action. Nothing happened, says Nand Kishore.

S K Sinha, the vice-president of Riga distillery, says the mill is much better than those in Uttar Pradesh and denies any discharge into the river. He accepts that before March 2007 it was disposing of effluents on agricultural land but says it stopped on spcb directions. He also says that the distillery does not operate during the rainy season. Lal Baba Thakur of Panchhaur does not agree. "The company has constructed lagoons and installed a reverse osmosis system but only for appearances. To save treatment costs, the mill discharges effluents into the river," he says. The lagoons and sludge storage areas are very close to the river and during the rainy season both effluent and sludge flows into the river. "The mill management waits for the rainy season. When rains start, it starts disposing of the stored waste in the river," say residents of Dhankaul in Sheohar and Panchhaur.

spcb's water monitoring report revealed that a pond just 4 km from the mill had the biological and chemical oxygen demand much higher than permissible levels. But of course, the board can't see why.