Controversy over non-official members; one appointee to advisory committee quits 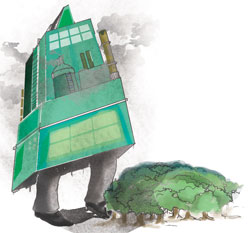 THREE days after protests by environmentalists, a non-official member of the newly-constituted Forest Advisory Committee (FAC), accused of having conflict of interest, has resigned. The committee, under the Union environment ministry, grants clearances for diversion of forestland for non-forest purposes.

K P Nyati, who has been associated with Confederation of Indian Industries (CII), quit the panel on August 23—after environmentalists wrote a letter to Union environment minister Jayanthi Natarajan. They termed his appointment “inappropriate”. The ministry is yet to accept his resignation.

The environmentalists had also demanded the removal of N P Todaria, professor of forestry in HNB Garhwal University, another non-official member of FAC. Todaria has been a consultant to hydropower projects in Uttarakhand in the past. He, along with Nyati and Mohammad Firoz Ahmed, a conservationist from Guwahati, was inducted into FAC on August 3. The ministry nominates four government officials and three independent members every two years to FAC to ensure jurisprudential use of forestland.

Moments after the ministry issued the names of the members, environmentalists were up in arms. They feared the duo’s appointment would lead to conflict of interest in FAC. In the letter, the environmentalists, including 79 organisations and individuals across the country, allege that Nyati has been part of CII since 1992 and represents the interest of industries. He has worked as the principal advisor at the CII-ITC Centre of Excellence for Sustainable Development and worked as CEO of Sustainable Mining Initiative (SMI) of Federation of Indian Mineral Industries (FIMI). FIMI members include companies like Tata, NALCO and Essel. “The mining companies associated with FIMI are interested in projects that require huge forestland,” states the letter.

On Todaria, the letter says FAC had rejected forest clearance for many projects in Uttarakhand the environmental impact assessment reports of which were authored by the professor. This includes the Kotli Bhel and Rupsiabagar Khasiabara hydropower projects. “Such questionable reports underline the fact that his independence and his credentials on the issues that FAC is supposed to look into are suspect,” says Himanshu Thakkar of South Asia Network on Dams, Rivers & People.

In April this year, the Wildlife Institute of India recommended to FAC that at least 24 large hydro projects on the Ganga should be dropped to protect the terrestrial and aquatic biodiversity of the river. Todaria, however, criticised the report and lobbied for the projects. “This bias for big hydropower projects in Uttarakhand would clearly disqualify anyone from becoming an independent member of FAC,” says the letter.

The letter also questioned the legitimacy of the duo’s appointments, saying these were “in violation of the orders of the Supreme Court”. According to the court’s order, non-official members of FAC have to be those who are independent and experts in the field of forestry. “Mining or other development projects cannot be said to be allied disciplines of forestry,” the letter notes.

On his resignation, Nyati says, “There was so much controversy that I decided to get out of it. It is true that I have been associated with industries’ associations but I had resigned from CII in 2009 and from SMI in April this year.” He adds: “What I did was part of my job and that does not prove that I have vested interests.” Nyati claims that in the current composition of FAC there is no one who understands proposed projects as minutely as he does. “I could have at least contributed efficiently on the impacts of such projects on forests.” Todaria shares similar sentiments. “According to government norms, consultancy along with teaching, research and extension is part of my duty. I have been a consultant to a few projects in the past, but since 2010, I have had no such involvement,” he adds. P J Dilip Kumar, director general of forests in the environment ministry and the chairperson of FAC, was not available for comments.