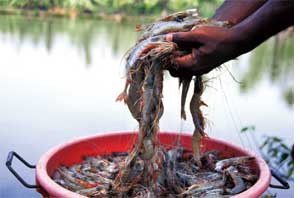 an outbreak of white spot disease wiped out 40-60 per cent of Kerala's ready-to-harvest shrimp in the first week of May.

Just three months ago, the Union agriculture ministry allowed import and cultivation of a new shrimp variety, which, aquaculture experts say, is susceptible to the viral disease. There is no known cure for the disease.

The Pacific white shrimp (Penaeus vannamei), native to eastern Pacific countries, could also bring in newdiseases like taura syndrome and yellow head to India, they warned. In the past decade several countries have suffered heavy losses from white spot and taura outbreaks following introduction of the variety.

Seafood exporters who had lobbied hard claimed the high-yielding variety would boost India's shrimp production and help recover its dwindling presence in the international market.

Shrimp account for 60 per cent of India's seafood exports. Black tiger shrimp (Penaeus monodon) has been the mainstay of India's seafood trade. But over the past few years the industry has been under pressure due to growing demand for white shrimp. According to government sources, between 2005 and 2008, shrimp exports dropped by 70 per cent. Coupled with weak appreciation of the rupee against the dollar, earnings of shrimp exporters have taken a hit. "Pacific white shrimp is inexpensive; it is becoming popular in the US and the EU--India's major shrimp markets. It makes sense to farm this species," Tarun Shridhar, joint secretary (fisheries) of agriculture ministry, said. P Brahmanandam of Devi Seafoods Ltd in Andhra Pradesh said white shrimp are a better option for profit (see box). "Many countries are focusing on white shrimp for export, so we need to catch up with them," he said. Asian export rivals such as China, Vietnam and Indonesia have already introduced this variety. Aquaculture experts differ and term the move shortsighted. 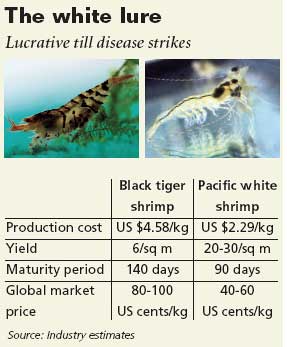 "Tiger shrimp may not give a good profit margin. But white shrimp is now grown almost everywhere. This means we will have to compete with many countries at the international market," said Indrani Karunasagar, professor at Karnataka Veterinary, Animal and Fisheries Sciences University, Mangalore. With wto (World Trade Organization) rules coming into play, there is a chance that anti-dumping duties will be imposed on white shrimp as there will be a glut in the market, she said. For Mohanakumaran Nair with the Kerala Agricultural University the bigger concern is the shrimp's susceptibility to white spot disease. White spot virus flourishes in brackish water and most of India's shrimp farms are in coastal areas, said Nair.

The government claims the decision was taken following a three-year pilot study by the Central Institute of Brackishwater Aquaculture, Chennai. In the risk assessment report, the institute said introducing white shrimp was a high-risk proposition, but could be done if there are safeguards in place. The agriculture ministry is preparing guidelines that call for stringent measures like washing of cages and equipment between batches of shrimp seedlings and treatment of wastewater. It has asked the Marine Products Export Development Authority to set up a quarantine centre. All white shrimp seedlings will be quarantined for 24 days at this centre in Chennai to observe disease symptoms upon entry into the country. Only disease-free shrimp will be allowed for farming, said an official.

But this does not guarantee the white shrimp will stay healthy, argued Karunasagar. It could easily pick up diseases in India, she said.