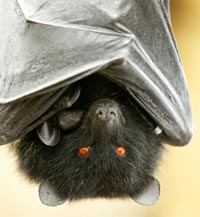 a research paper in Nature highlights how treacherously slippery is the ground where ecological statistics and wildlife conservation are forced together. The paper, 'Effectiveness of the global protected area network in representing species diversity', used five global data sources on the distribution of species and protected areas (pas) to assess the effectiveness of pas in covering species diversity. The collaborative study was lead by the Centre for Applied Biodiversity Science of the us-based Conservation International.

The paper calculated how many endangered species have been covered by the pas. "These sanctuaries cannot protect what they do not contain in the first place. Hence we identified species that fall completely out of the current pa network," says Ana S L Rodriguez, the lead author of the paper. Rodriguez and her co-researchers compared a map of over 100,000 pas with maps of 11,633 species ranges from four taxons. In total, 1,171 threatened bird species, 4,735 mammals, 5,454 amphibians and 273 freshwater turtles and tortoises were studied.


Overall, 1,424 gap species (12 per cent of all species analysed) were identified (see table: Job done?). The researchers also found that of the 'covered species', 1,423 were outside large pas (bigger than 1,000 hectares). The amphibian species were found to be the least represented taxon. Within any given taxon, threatened species (which usually tend to have smaller ranges) were found to constitute proportionally higher numbers of gap species. Twenty per cent of all threatened species analysed were identified as gap species (Nature, Vol 428, No 6983, April 8, 2004).
The perturbing figures are bound to enamour the researchers to conservation groups. The paper's significant prescriptions to create pas that provide wider and better coverage of biodiversity, too, will be accepted whole-heartedly. But in jumping from statistical analysis to providing solutions the researchers may have outreached themselves.

The authors reach two important conclusions. One, they recommend that "the expansion of the global network of pas must account for biodiversity patterns, rather than rely on general percentage-based targets that are formed largely by political and feasibility considerations". Secondly, they suggest that the current network could cover the species better if it was biased towards the tropics (to match the higher level of endemism in the region).

The conclusions perch upon a large number of assumptions. The authors admit to some. But glaringly leave out others. The paper admits that the coverage of a species under a pa does not necessarily ensure protection. It also admits that the levels or error in calculating the coverage of pas could be quite high as compared to other analysis of similar kind. In the case of Mesoamerican amphibians there was a 21 per cent digression from a similar study done by another group of scientists (see chart: Prescriptions lose value). To make matters worse, errors were generated due to the absence of data on the species range.

Also, the method of defining a covered species as one having some part of its range covered by a pa is debatable. The underlying assumption, that covering just about any part of the range shall provide protection, is easily argued against. Numerous studies of species like the Great Indian bustard, which have their ranges strung over less-used patches as well as human habitats, have shown that conservation measures should not be restricted to the artificially designed pas.

Again, while talking of coverage of all taxa, the authors ignore the fact that to increase the number of species covered under the pas, the area designated as protected increases more than proportionately. Covering small range species would demand either hundreds of fragmented pas spread over thousands of hectares or creating numerous large pas around the tropics. The authors fall into a deeper quagmire by remaining oblivious of the long running debates on the efficacy of different sizes of pas. But Rodriguez admits, "Conservation strategy requires a set of smaller pas in order to prevent species from going extinct. Many of these smaller areas, however, may not be viable in the long-term and their protection needs to be seen buying time rather than solving the problem."

She also defends the creation of pas in the tropics: "Our concept of pas is quite broad, it does not mean strict no-go areas. It includes a diversity of models such as indigenous and forest reserves, allowing for multiple use."

But, the results that the authors' tedious calculations have produced could be used as polemically to ask for the disbanding of pas in many instances. The creation of pas is always a political process. The authors do well to challenge the goal of 10 per cent coverage of all biomes by pas (as proposed by the World Conservation Union) but get entangled in solutions that lie beyond statistics.