Infection on the rise 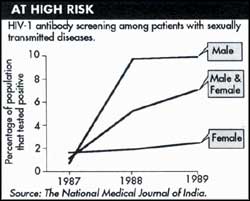 THE NUMBER of people in Bombay who are infected with the AIDS-causing human immunodeficiency virus- 1 (HIV-1) are increasing at an alarming rate, says a recent study (The National Medical Journal Of India, Vol 6, No 1).

H A Kamat and D D Banker of Bombay's Sir Hurkisondas Nurrotumdas Hospital, who conducted the study, surveyed blood samples from 599 victims of sexually transmitted diseases between 1987 and 1989. They found the number of HIV-1 carriers had grown fourfold from 1.3 per cent in 1987 to 5.3 per cent in 1988 and by the end of 1989, about 7 per cent of the patients in the sample group was infected with HIV-1.