Human trials of pesticides can be permitted, state US scientists 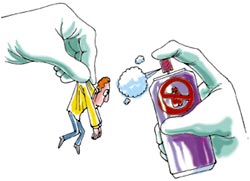 a recent us report may have wide-ranging impacts on international pesticide research and human health because it has given a clean chit to human testing of pesticides in the country. Intentional human dosing studies for epa regulatory purposes: scientific and ethical issues was drafted by the us National Academy of Sciences' Committee on the Use of Third Party Toxicity Research with Human Research Participants, Technology and Law Programme.

Among other things, the committee advises the us Environmental Protection Agency (epa) to impose stringent scientific and ethical standards on the trials. It recommends setting up of a Human Studies Review Board to ensure the standards will be adhered to. It also addresses the issue of reimbursing the subjects, and has advised the epa to further study whether compensation should be given to subjects injured during the experiments. According to epa's spokesperson, the findings would be weighed soon and final rules will be formulated in the coming months.

Controversy about the trials started in 1996 when the country's Food Quality and Protection Act was passed, tightening safety standards on pesticides. Thereafter, the chemical industry conducted human trials to prove its products were safe. This led to an uproar and environmentalists pressurised epa to halt the trials till evidence was provided about their feasibility. Hence the epa commissioned usa's foremost scientific agency to mull over the issue.

Predictably, the pesticide industry has welcomed the report. According to a statement of CropLife America -- a representative of the chemical industry -- the companies are bound to provide information needed to determine the safety of their products. The industry had been arguing that current regulatory limits on exposure are overly cautious. For instance, epa first determines what dose is toxic to animals. It then divides that dose by a factor of 10 because humans may react more sensitively than animals; since some people are more susceptible than others, regulators lower the potentially toxic dose by further factor of 10.

As per environmentalists, with the help of human trials the companies may now show that people are not more sensitive than rats, which means higher exposure levels for humans might be permitted. "We cannot trust the industry to abide by ethical measures and not abuse loopholes in the guidelines," says Ken Cook, president of Environmental Working Group (ewg), a us-based public interest watchdog. In an open letter to the chairperson of the nas committee, Richard Wiles, senior vice president of ewg, mentioned that the report is "blinded by oversights and it is certain that abuses will follow".

According to Cook, though the committee has accepted testing of pesticides and pollutants on children under limited circumstances only, it fails to define those situations. Earlier reports by two think-tanks of the epa had concluded that pesticide tests on children are unethical and should never be accepted.