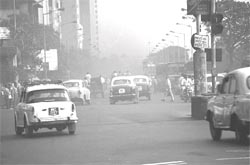 a yet undisclosed research sponsored by the West Bengal Pollution Control Board (wbpcb) has found that Calcutta's schoolchildren have serious pulmonary symptoms, very much like those of "adult smokers." And the culprit is Calcutta's heavily polluted air.

According to the results of the study, conducted by scientists from the National Cancer Research Centre and the Calcutta University, children are facing severe "respiratory strain" due to the "poor air quality" of the metropolitan city. The researchers did a chemical analysis of the sputum of 153 children between the age of six and seven years. They were similar to that of "regular smokers."

It was also found that the high level of suspended particulate matter ( spm ) in the city's air was affecting the children with coughs, colds and other infections of the respiratory tract, like bronchitis and asthma. Paediatrician Tridib Banerjee warned, "Unless something is done immediately, almost all city children will be vulnerable to respiratory diseases and asthma."