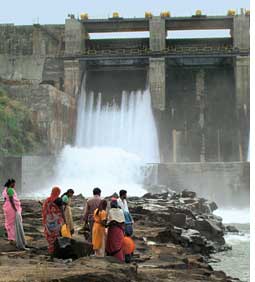 An excuse to privatize irrigation project

STARTED in 1984, the yet to be completed Nira Deoghar irrigation project in Maharashtra has run into rough weather. A recent judgement by the three-member water regulatory authority has put on hold the privatization of the project in Bhor taluka, Pune district.

Aimed at irrigating 45,000 hectares the project when conceived was to cost Rs 62 crore. By 2007, the state government had spent over Rs 450 crore on the project, which remained incomplete. Another Rs 870 crore was required to finish the project, claimed fresh official estimates. What remained was 5 per cent of dam construction and 164 km of canals. A water distribution network also had to be put in place. With state coffers drying up, Maharashtra needed an investment of Rs 36,630 crore to complete its over 1,200 incomplete projects.The government decided to seek private participation through an advertisement issued in September by the Maharashtra Krishna Valley Development Corporation (mkvdc), a state body.

The recent judgement forced the corporation to withdraw its advertisement on December 17. But the regulatory authority's order is in conflict with a government resolution, which allows private sector participation in such projects (see box Who calls the shots).

After the advertisement was published, Prayas, a non-profit in Pune, sought the intervention of the Maharashtra Water Resources Regulatory Authority. In its petition in January 2008 Prayas challenged the advertisement and claimed it was issued without involving the authority, mandatory under the Maharashtra Water Resources Regulatory Authority Act, 2005. It also asked for the involvement of interested parties like water user associations, farmers and non-profits, which mkvdc dismissed.

"There is little transparency in such projects and the government lacks clarity. There is confusion whether to empower the regulatory body or limit its role," said Sachin Warghade, research associate at Prayas. But he is happy as the response to the petition was positive.

The regulatory authority conducted a hearing and ordered mkvdc to withdraw the advertisement and not to re-advertise until the 2003 resolution was revised. mkvdc officials argued that their actions conformed to the existing law. "The eoi (expression of interest) advertisement should be considered as a short tender notice where only mkvdc is involved... eoi advertisement is supposed to be altered/modified... the final bid document will be free from all ambiguities," read the written report submitted to the authority.

The report added that since the project received administrative approval in 1984, it should not be considered a new project and kept out of the authority's purview. The authority countered the corporation's view and said there was need for a fresh economic review especially in the light of a new factor--the private developer, who would bear costs and secure benefits. This may impact the project, including water tariffs, the authority said.

The authority was correct in pointing out water tariffs may increase, said Warghade. "The company would like to recover the money it invests in the project and earn profits out of it. Increased tariff will directly impact farmers. Such a revenue model needs to be scrutinized before approval," he added.

According to state records, as of March 2007, there were 1,246 incomplete projects.