Ever wonder what a nuclear explosion looks like from the inside? 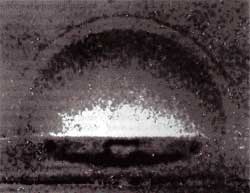 it is something that has always tempted physicists. What does the inside of a atomic bomb looks like a microsecond after it detonates? In fact, scientists at the Los Alamos National Laboratory, usa , stayed up nights thinking about it, and a group of them recently demonstrated a clever new way to film the burn fronts that determine whether a warhead booms or fizzles. This technique may, ironically, one day reduce the damage that radiation treatment inflicts on some cancer patients.

The experiment did not require the researchers to annihilate a chunk of New Mexico, usa , where the laboratory is located. It actually takes two detonations for a nuclear weapon to wreck the kind of havoc it is notorious for. An initial blast of conventional high explosive is painstakingly tailored to implode a plutonium core into a critical mass. If it works, a chain reaction then takes over to produce the final, massive explosion. But thanks to the Comprehensive Test Ban Treaty, experimenting with a real atom bomb could turn out to be a bit risky.

So, the research team, led by John McClelland, substituted ordinary metal for plutonium. The researchers then set off their "half bomb" inside a four-foot-diameter sphere made of steel. The idea was to make movies of the burning explosive, then to use those pictures to check the accuracy of the supercomputer models.

Not even Superman could have been be able to watch a shock front moving at more than 24,135 kilometres per hour behind two inches of steel, but for the lesser mortals, even x -rays are quite useless. "There is no technology for making an x -ray movie," said Christopher Morris, the project's chief scientist. And even the fastest photographs suffer a pronounced motion blur.

So the scientists hooked their blast chamber up to the laboratory's particle accelerator and made what Morris claims to be the world's first movie recorded using matter rather than light. About 325 nanoseconds after detonation, the accelerator peppered the sphere with rapid-fire bursts of protons. A special camera on the other side translated these protons into an image showing the high explosive and the burning plasma that it hurled outward. "This might even be exciting to people who don't care much about the 'evil weapons stuff' that we do here," Speculates Morris. "This technique should be able to deliver radiation more accurately to tumours with less damage to the surrounding tissue," because the protons can be focused more tightly than conventional x -rays. Initial tests of proton therapy for eye cancer have already begun, Says Morris.