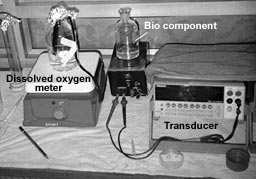 scientists at the Institute of Genomics and Integrated Biology (igib) in Delhi have developed a device for instant monitoring of organic pollution in wastewater. The Biochemical Oxygen Demand (bod) biosensor can analyse a sample and generate the results in less than 10 minutes, and that too, at the site itself. In comparison, other methods to estimate bod require 3-5 days, besides costly incubators and chemicals.

Lack of on-site monitoring tools has handicapped agencies such as the Central Pollution Control Board (cpcb) that monitor sewage and effluent treatment plants. Says cpcb additional director R C Trivedi, "A quick estimation by the sensor would facilitate monitoring agencies in initiating immediate action against violators, thereby leading to stricter enforcement of pollution control laws." The device has been patented and is likely to be marketed within 6 months. It comes as culmination of years of research funded by the Union ministry of environment and forests (moef).

Biosensors are measuring devices that use a biological entity -- enzymes, antibodies or microorganisms. But most of the biosensors developed in India have been for healthcare applications such as for assessing blood glucose. The first bod biosensor was developed in Japan in 1977. bod is a commonly used environmental index showing the amount of oxygen microbes required to decompose organic matter in a given wastewater sample.

igib's device has three main parts -- a bio component, a dissolved oxygen (do) probe and a transducer (a gadget to convert electric current into a signal). But the major difference between the new and older biosensors is the former's bio component. Explains Rita Kumar, who headed the research at igib, "The biological component comprises a consortium of bacteria (older versions used a single bacteria) attached to a nylon membrane (which prevents its leaching, thereby increasing the shelf-life)." The bacteria eat up the organic matter -- the process depletes oxygen that the do probe measures as a current. The transducer converts the current, with the help of software incorporated in the biosensor, into displaying bod values.

Kumar claims the biosensor can detect bod values from less than 10 parts per million (ppm) to 2,500 ppm. But according to Soli Arceivala, a Mumbai-based expert in wastewater treatment, "The aim should be to make the instrument sensitive enough to measure bod of 3 ppm and less for a stricter monitoring of river stretches."

Will the device be costly? Its most expensive part is the do meter that costs up to Rs 1 lakh. But igib plans to make it affordable. Says Kumar, "We plan to source the do meters from the National Physical Laboratory. The estimated cost of the bod biosensor is about Rs 30-40,000 or less. " Besides, the device has a long shelf life -- one year as compared to 40-60 days for other biosensors.

However, it is one thing to develop a device and another to popularise its use. Earlier too, igib's research in the field of bod had borne results, which failed to find wide acceptance. This happened with bodseed (a consortia of bacteria available in powdered form) developed in 1992 and with bodbead (a polymer with an immobilised collection of bacteria) developed in 1994 for the older method. Says Santosh Makhijani, additional director, cpcb who is closely associated with igib , "Even though we publicise these innovations in journals and conferences, no demand has been created. It seems people don't care about the quality of data."

Kumar suggests monitoring agencies such as m o ef and cpcb make the innovative technologies mandatory. What needs to be seen is whether the government can capitalise on this device, which can go a long way in pollution control.