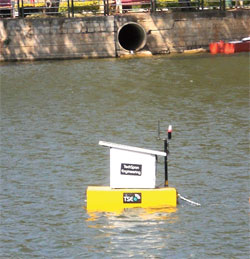 IN THE first week of April, the Central Pollution Control Board (CPCB) oversaw an experiment to monitor, minute to minute, the water quality of the river Yamuna. The two-week trial at the water intake point of the Wazirabad water treatment plant in north-east Delhi was conducted by a private firm to ascertain the feasibility of monitoring water quality real time.

Talk of installing an online water quality monitoring system began in earnest after the Delhi government complained to environment minister Jairam Ramesh about spikes in pollutants in the Yamuna because upstream state Haryana has not adopted pollution abatement measures. The spikes leave Delhi Jal Board with no choice but to cut supply to consumers. The two-week monitoring, however, did not show any sudden increase in pollutants.

Availing this facility comes at a cost—Rs 25 lakh per station. CPCB is convinced of its need and has identified two locations in Delhi and eight along the river Ganga (Varanasi, Haridwar and Kanpur included) for installing the system.

The Union ministry of water resources has approved CPCB’s proposal to invite tenders for the stations, likely to be commissioned by June 2012. “If the project is successful we can increase the number of stations,” says Basu.

But is there any sense in spending money on such equipment when pollution abatement infrastructure is absent and the nature of pollution well-known? Basu says the stations are being set up in locations where infrastructure is either in place or would be set up soon.

Lakes can be monitored, too

At present, Indian rivers are monitored on a monthly basis. Tests are conducted on random grab samples; the reports take up to five days. Ten years ago when online monitoring technology was still developing, CPCB had carried out a similar experiment. It was not successful—the probes had to be cleaned frequently because Indian rivers are turbid. The equipment currently in use has a self-cleaning mechanism and is not affected so much by turbidity.

Scientists have, of late, focused attention on developing novel sensing materials and detection principles to identify different types of pollutants. Some methods are based on electrochemical detection and others use optical detection methods (see ‘Technology in use’). Both were employed in the experiment at the Wazirabad plant.

Online monitoring is used for checking water quality in lakes also. Singapore, for instance, has 19 water profiling stations in 17 reservoirs. In India, a private company conducted a 24-hour demonstration for the Karnataka pollution control board in three lakes of Bengaluru. TechSpan Engineering monitored the quality of the lakes at various depths. In one of the lakes, it was found that dissolved oxygen levels in the water declined steeply below the depth of two metres because of algae which prevented sunlight from penetrating the water.