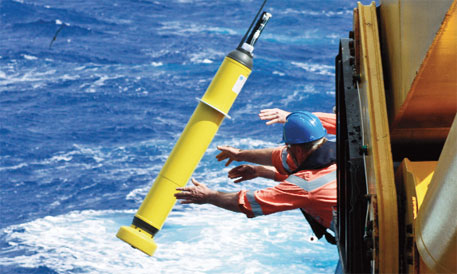 IT has long been debated how global warming will affect the water cycle—the cycle of rainfall and evaporation from land and oceans. Theoretical predictions using relationship between temperature and the amount of water vapour the atmosphere can hold suggest that global warming would intensify the water cycle twice as much as predicted by climate models.

Changes in water cycle are worrisome as they may lead to dry regions getting drier and wet regions wetter.

To ascertain the real damage that climate change would cause to the water cycle, researchers led by Paul Durack from Lawrence Livermore National Laboratory in the USÃ”Ã‡Ãªmeasured changes in salinity of oceans. “As the atmosphere warms, it can hold and transport more moisture as water vapour.

This leads to an increase in rainfall in regions that are wet and evaporation in regions that are dry,” says Durack. So, ocean regions with less rainfall will be more salty than those with high rainfall. “This makes salinity a good way to measure changes in water cycle,” he adds.

For the study, the scientists compared salinity and temperature data between 1950 and 2000. They inferred that the water cycle had accelerated by about four per cent over the past half century. This implies that the water cycle could quicken by as much as 40 per cent later in the century as the planet warms. This confirmed that the theoretical value is correct. The study was published on April 27 in Science.

The temperature data showed the planet heated by 0.5°C between 1950 and 2000. Climate models suggest this world will warm by 3°C by the end of the century. A 3°C increase in temperature would mean the water cycle would intensify by 24 per cent and not 20 per cent as suggested, the researchers note.

The team warns that alteration in the water cycle will also affect the availability of fresh water and threaten humans and ecosystem. “Changes to the global water cycle and the corresponding redistribution of rainfall will affect food availability, stability, access and consumption,” says Durack.

Balasubramanian Thangavel, director of the department of marine sciences at Annamalai University in Tamil Nadu, points out that alteration in water cycle will also affect marine organisms. “Frequent occurrence of algal blooms will result in mass mortality of fish species. The impact will be more visible in tropical waters as it is already in the upper thermal regime,” he adds.