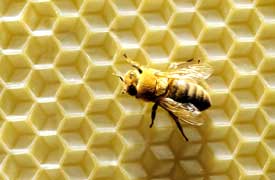 when domesticated honeybees interact with wild native bees, they are up to five times more efficient in pollinating sunflowers than when native bees are not present, claims a study by a pair of researchers at the University of California (uc, Berkeley, and uc Davis.

"Until now, we've thought that honeybees alone were doing most of the pollination," said Sarah Greenleaf, the study's lead author. "But now we know that a lot of honeybee pollination happens because of their interaction with wild native bees. This means that wild bees are much more important than we previously thought."

The findings suggest that protecting wild native bees and their habitat could play a crucial role in ensuring adequate pollination for a host of important crops. The study was published in PNAS (Vol 103, No 37, September 12, 2006). Working with conservation biologist Claire Kremen, Greenleaf observed the behaviour of honeybees from managed hives and wild native bees in sunflower fields during two growing seasons. In fields where wild bees were rare, a single visit by a honey bee produced an average of three seeds. But as wild bee numbers increased, so did the number of seeds produced per honeybee visit, up to an average of 15 seeds per visit.

Male wild bees, probably looking for mates, latch onto worker honeybees, which are sterile females, causing them to move from one flower to another. Secondly, female wild bees appear to "dive bomb" honeybees, forcing them to move. Frequent movement between flowers spreads pollen around more effectively.