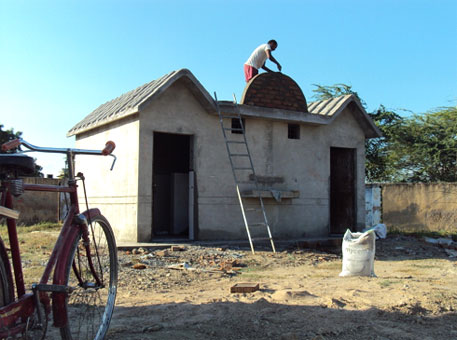 Water Aid India, a New Delhi-based non-profit, has launched a tool to track the progress in construction of toilets under “Swachh Bharat Mission” (SBM).

Under this ambitious scheme, the government has planned to achieve universal toilet coverage by October 2, 2019. The day will be commemorated as the 150th birth anniversary of Mahatma Gandhi.

Called “Interactive Map”, the tool will track progress at the district level. “We will monitor how many toilets are constructed in each of the 624 districts in real time,” said Mamta Das, campaign manager at Water Aid India (WAI).
The real-time data will be accessed by the Ministry of Drinking Water and Sanitation.

“Weak governance and monitoring were held responsible for poor implementation of India’s sanitation programme till now. Our work on the ground for almost three decades tells us that ‘what gets measured is what gets done’. It is necessary to have a robust mechanism for monitoring,” Das added.

The tool was launched on November 18 in New Delhi. WAI chief executive, Neeraj Jain, expressed hope in the renewed enthusiasm displayed by the government in achieving the target.

“As we observe yet another World Toilet Day, India continues to have the highest number of under-five children deaths every year. A majority of them die of preventable and curable diseases like diarrhoea and pneumonia [diseases linked to poor sanitation],” he said.

“Though the Indian government has stepped up efforts to provide universal access to toilets by 2019, we need to realise our responsibilities and work towards securing a healthy future of our kids,” Jain added.

According to Water Aid India, this map will track the construction of individual household toilets (IHHL) and community sanitary complexes up to the district level. The Ministry of Drinking Water and Sanitation’s baseline survey for 2012 and ongoing data collection have been used as data sources for this map. It will help identify key gap areas and locations that are lagging behind.

Sanitation coverage is around 30 per cent in rural areas and about 80 per cent in urban areas according to Census 2011. Budget allocation remains at 0.04 per cent of the GDP. People with disabilities, women, girls and socially excluded communities suffer the most due to this neglect of sanitation and hygiene.