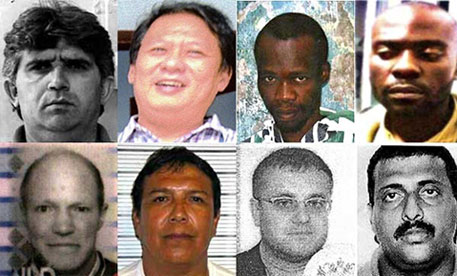 The list, along with Interpol’s appeal to the general public for information about the whereabouts of the criminals follows an inquiry into the whereabouts of 139 suspects wanted by 36 countries. The investigation is code-named “Operation Infra-Terra” and was launched on October 6.

Feisal Mohamed Ali is alleged to be the ringleader of an ivory smuggling ring in Kenya. Ahmed Kamran is charged with smuggling over 100 live animals – including giraffes and impalas – from Tanzania’s Kilimanjaro airport to Qatar on a military airplane. Sergey Darminov is thought to have led an illegal crab-fishing operation in Russia that netted $450m. Adriano Giacobone is wanted on charges including illegal transport and discharge of toxic waste, poisoning water beds, kidnapping, illegal detention, carrying of firearms, aggravated theft and violence against a police officer.

Ioannis Kokkinis, criminal intelligence officer with Interpol’s Fugitive Investigative Support unit which is coordinating Infra Terra, encouraged the public to share any information with their local or national police or Interpol to help track down the fugitives.

“Even the smallest detail, which you might think is insignificant, has the potential to break a case wide open when combined with other evidence the police already have,” said Kokkinis in a press release by Interpol.

“Sometimes, all it takes is a fresh pair of eyes to bring new momentum to an investigation and provide the missing clue which will help locate these wanted individuals, some of whom have been evading justice for years,” he added.

“We believe that the capture of these criminals on the run will contribute to the dismantlement of transnational organised crime groups who have turned environmental exploitation into a professional business with lucrative revenues,” Stefano Carvelli, head of Interpol’s Fugitive Investigative Support unit, was quoted as saying.

The Interpol press release added that Operation Infra Terra was conceived to build on the success of previous similar operations, including Infra-Americas, Infra-SEA (Southeast Asia) and the global Infra-Red operations in 2010 and 2012, which has so far led to some 600 arrests worldwide.

The release advised ordinary citizens to send information on the possible location of the targets of Operation Infra Terra to Interpol’s Fugitive Investigative Support unit or any national Crime Stoppers programme.