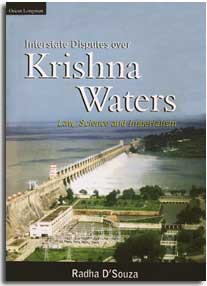 The title of the book under review does not do much justice to what lies between its covers. Radha D'Souza's study is much more than an analysis of the Krishna water dispute. It covers diverse themes imperialism, law, sociology of science, development projects, social engineering. Conflicts over waters of the river Krishna provide the anchor for the enquiry.

Interstate Disputes over Krishna Waters is an attempt to situate river water conflicts in the larger context of India's federal constitution. It traces the ideological moorings of the Krishna Water Disputes Tribunal that apportioned waters of the river Krishna among Maharashtra, Karnataka and Andhra Pradesh, and also underscores links between development projects in the Third World and global capital.Law and science are linked with development issues; so are a series of local and global issues that draw examples from, or build on the history of colonialism and politics of independent India.

D' Souza's endeavour to historicise the Krishna water dispute is a refreshing one, particularly when one is inundated with environmental studies that take a very compartmentalised approach. The author shows that the violent history of colonialism bears heavily on the present. Exploitation now wears the garb of "development projects", a significant component of which is river-basin development. And development projects are now in thrall to us hegemony. Science and law further the imperatives of monopoly finance capital.
Disputes over Krishna waters had their roots in the colonial period. They were primarily fallouts of contradictions between different groups of elites in riparian areas. Agreements for water sharing among constituent Indian states engineered by the colonial state persisted in independent India. For D' Souza, post-colonial agreements and treaties, and institutions that sought to enforce them, were as much instruments for 'social engineering' as had been those in the colonial period. So it does not surprise us when the author suggests that the Kaveri Water Disputes Tribunal was heavily influenced by a colonial system of law, which did not account for the historical and geographical specificities of the dispute, and reduced the river to a property -- a disputed one.

This to D'Souza is symptomatic of an essential characteristic of post-independence legislation. The author shows how legislation was essentially concerned with making 'traditional production' relations amenable to capitalism. This was also evident in the application of the principle of "equitable apportionment" in the Krishna waters award. Political compulsions to ensure centralised political control -- to perpetuate traditional relations of production in harmony with capitalism -- overtook the constitutional directive of federalism in the award's application.
The demand for natural 'resources' to fuel industrial growth led to commissioning of large dams in the post-colonial period. The projects were undertaken, even when the country did not have sufficient scientific data about their viability. Hyperbole on nation building and development very often became a heady -- and ultimately fatal -- substitute for scientific data.

According to D' Souza, the ideology of development and institutions of law and science in nation states only reproduced the imperial relations of the colonial era. Multilateral institutions emerged as a nodal institution to further the neo-colonialist agenda after World War II, especially in the Third World.

Membership of the International Commission on Large Dams and other organisations that grew between the two wars clearly influenced the adoption of technologies and choices which, even if they created indebtedness and inequity, were held out as leading to 'development'. Sructures of political economic dependency of the Third Wold to the industrial world was replicated in the former centre-state relations in countries like India ensured that. This resulted in externally dictated projects such as dams on the Krishna.

Rich in theoretical insights, Interstate Disputes over Krishna Water contains illustrative details, statistical information and handy charts. It will be useful to historians, planners and anyone interested in development projects.

Ritupan Goswami is with the Centre for Studies in Science Policy, Jawaharlal Nehru University, New Delhi