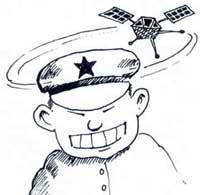 CHINA came of commercial space age with the launch of the Australian telecommunications satellite, Optus B1. This was their second attempt at launching the satellite. The first, in March, failed as a short circuit cut off fuel flow to the rocket engines. China has for years been trying to break into the commercial satellite business. But, with the US stranglehold over satellite manufacture, an agreement had to be negotiated on safeguarding US technology and domestic launch market. The US agreed to China's launch as long as it promised not to undercut too much the price of a US launch.

Meanwhile, South Korea's first satellite was launched from French Guiana, by a European Ariane rocket. The satellite carries an electronic mail system and will be used for earth imageries and other experiments.