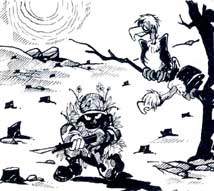 IRONICALLY, trees are now a security problem for the army. The armed forces are seeking urgent permission from the environment ministry for selective tree-felling in the thickly wooded areas under their control, for security reasons. They claim, while trees were earlier planted as camouflage, now the areas have started sticking out like a sore thumb in the virtually denuded neighbourhood.

Birds, attracted by the thick vegetation, were an additional menace as they were a danger to the sophisticated and expensive military aircraft during landings and take-offs. Adequate compensatory afforestation will be undertaken, said army sources, and large-scale tree-planting in the neighbouring denuded areas would also be taken up to re-camouflage army camps.

However, the Union environment ministry has yet to rule on the armed forces request and some environmentalists suspect there may be more to the tree-felling, which may involve timber sales and land speculation.