This is next in the series of frog extinction events 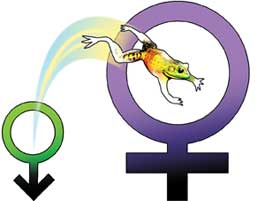 LIBERAL use of the pesticide Atrazine in the US, China and Australia is affecting the frog population, sexually—males are turning into females.

This is in line of a series of extinction blows this group of amphibians has faced over the past decades. The fact that frogs are on the threshold of dying out has been a subject of debate among ecologists for nearly two decades now. Causes are several, but the issue is complex and lack of conclusive data does not help in making amphibian conservation any easier.

“Different species are affected by different things. An epidemic disease caused by a fungus has endangered some species. Outbreaks of this disease may also be enhanced by environmental conditions. In other places habitat loss and habitat fragmentation, are important. Pesticides and fertilizers also affect some amphibian populations, either directly or by changing the balance of ecological systems to favour predators or parasites or pathogens of frogs,” said Ross Albert of the School of Marine and Tropical Biology at the James Cook University in Australia (See “The chorus is dying”, Down To Earth, November 15-30, 2009).

The current experiment was conducted by scientists at the University of California in Berkeley in USA. A population of 40 all-male African clawed frogs was exposed to atrazine at 2.5 parts per billion (ppb). Their development was compared to a control population of 40 unexposed male frogs. About 90 per cent of the exposed frogs showed suppressed sexual maturation through low sperm count and low testosterone levels.

The remaining 10 per cent developed into females, capable of mating with other non-exposed males and producing offspring. The offspring produced by these sex-reversed males are all male. This is because although the males turned into females and even developed female genitalia they were genetically male—they lacked the female sex chromosome.

This indicates that in nature, where levels of atrazine may be anything from 3ppb to over 100ppb, the sex-ratio of frog populations is getting skewed. “Mathematical models suggest that this very mechanism could drive populations to extinction,” the authors said.

Frogs are not the only animals atrazine affects. Similar studies have shown that exposure “demasculinizes” fish like the salmon and even the caiman reptile populations have experienced the effect. Also, high levels of atrazine in the urine of farmers exposed to the pesticide have been associated with low sperm count, poor semen quality and prostate problems. Atrazine can also be transported up to 1,000 kms from the place of application by rainfall. This means that it can damage environments untouched by farming.

Atrazine as a chemical has been banned in the European Union, but a chemical, similar in composition and nature, called terbuthylazine is used there thus nullifying the advantages of a ban. In the US, however, where 80 million pounds of atrazine is used in a year, the Environmental Protection Agency refuses to ban it on grounds of insufficient evidence.

“There is no way to tell what effects the chemicals we use are likely to have on natural systems. In the case of atrazine, it seems that there is enough evidence that standards for acceptable environmental levels should be reviewed, and existing standards should be enforced rigorously,” said Alford.