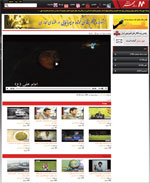 The depleted online menu for Iranians has got a little better. The country has launched a video upload site, Mehr, to promote Iranian culture. But just days after its launch, the website, that officials hope will rival Google’s popular YouTube, has been marred by poor download speed and technical glitches.

Iran already has a popular video-sharing website, Aparat, which is run by the company behind Iran’s social-networking site Cloob. But Mehr, run by the state broadcaster Islamic Republic of Iran Broadcasting, is the first government-sanctioned competitor to YouTube in the country.

Hundreds of videos have already been uploaded to Mehr, mostly clips from the state TV, government-approved music videos and religious sermons. But users testing out the new site were met with a continuous “loading the player” message.