Many of Iraq's water resources, including two great rivers—Tigris and Euphrates—flows through areas that are under IS militants’ control 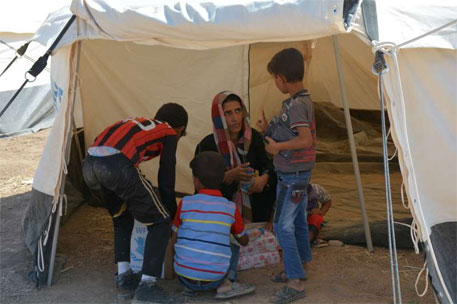 Thousands of Iraqi farmers have been forced to flee their lands or have had their assets destroyed or seized in the conflict-ridden Iraq. Many others have seen markets for their crop disappear or livestock sold off amid the ongoing crisis brought on by Islamic State (IS) militants.

Though aid from United Nation’s Food and Agriculture Organization (FAO) is starting to roll out to nearly 28,000 farming families whose livelihoods have been left in tatters, much more needs to be done.

According to the international food agency, most of Iraq’s wheat production takes place in the north, which has been significantly destabilised by the conflict. Nearly all of the country’s water resources flow through areas under the control of the IS and affiliated armed groups.

June’s harvest was severely compromised as millions fled their homes and farms. The crisis has now left 2.8 million people in the country in need of food assistance. “If not addressed in time, this will translate into longer-term reliance on food aid and other forms of aid," said Abdessalam Ould Ahmed, FAO Assistant Director-General and Regional Representative for the Near East and North Africa. “Millions of vulnerable Iraqis are in dire need of help to restore their self-sufficiency and build resilience,” he added.

The FAO has now begun delivery of seeds and fertilizer to 20,000 farmers in Ninevah, Dohuk, Erbil, and Diyala governates to support them during current winter planting season. "This is an important step, but the needs are immense and we are facing a $38 million shortfall in terms of what is needed to prevent a further collapse of agriculture," says Fadel El Zubi, FAO’s Representative in Iraq.

The IS has captured large areas of Iraq and Syria, declaring an Islamic caliphate that erases borders between the two. Its fighters have killed or driven away many Shia muslims, Christians and other communities who do not share their ultra-radical brand of Sunni Islam. Moreover, many of Iraq's water resources, including its two great rivers the Tigris and Euphrates, flows through areas under IS control.

“There needs to be joint effort from international and local partners to provide urgent support to farming families, particularly in crop and livestock production, to mitigate the damage to food, income and employment sources. Particularly, many partners such as World Food Programme, Islamic Relief and local NGOs are rushing to mitigate the effects of this crisis, but much more assistance is needed,” says El Zubi in an interview to Down To Earth.