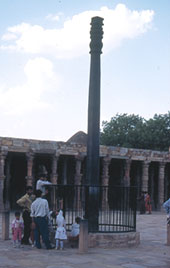 ever wondered why the 1,600-year-old iron pillar located near Delhi's Qutab Minar has never got corroded despite harsh weather conditions? Metallurgists at the Indian Institute of Technology (iit), Kanpur, have recently found the reason behind this. They have discovered that a thin layer of misawite, a compound of iron, oxygen and hydrogen, has protected the pillar from getting corroded. The protective film started forming after three years of the pillar's erection and has been growing ever so slowly since then. After 1,600 years, the film has grown one-twentieth of a millimetre thick. "The film was formed catalytically by the presence of high amounts of phosphorous in the iron -- as much as one per cent against less than 0.05 per cent in today's iron," says R Balasubramaniam of the iit.

The high phosphorous content is a result of the unique iron-making process practiced during ancient times, whereby, iron ore was reduced to steel in one step by mixing it with charcoal. Modern blast furnaces, on the other hand, use limestone in place of charcoal, yielding molten slag and pig iron that is later converted into steel. In the modern process most phosphorous is carried away by the slag. The pillar is a living testimony to the skill of metallurgists of ancient India," says Balasubramaniam.