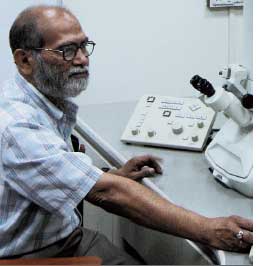 The millions of arsenic victims living in Bangladesh and India have another option for obtaining clean drinking water. Finely divided iron oxide nanoparticles (ionps) can remove arsenic from contaminated water.

Iron-containing compounds have been used in purifying groundwater. By the property of adsorption, arsenic can bind to the solid surface of iron. Small iron oxide or hydroxide particles are released into groundwater. The arsenic-adsorbed iron compounds are then filtered out, thus purifying the water. This led the researchers to explore the potential of ionps in arsenic removal because use of nanoparticles could help increase the surface area.

The researchers produced ionps as finely divided loose nanopowder. Sodium arsenite solution was added to the ionps in a test bottle and the bottle was shaken. The study found that adsorption of arsenic reached maximum level (96 per cent removal) with 2gm per litre of ionps.

"Large bare surfaces of ionps have been found to be an effective adsorbent for the trace removal of arsenic from arsenic-contaminated water," said lead researcher Sanat K Roy from the department of Metallurgical and Materials Engineering, Indian Institute of Technology, Kharagpur. ionps are easy-to-produce and economically viable for mass use, said the study published in the January 2009 issue of the Journal of Environmental Science and Health.

A different study showed that iron oxide nanoparticles could induce harmful effects on humans. Roy said that there is no such possibility with their method. ionps have magnetic properties and arsenic-adsorped ionps were filtered out completely from the aqueous solution using magnetic separation.