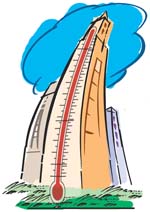 conventional scientific wisdom has it that irrigation works against global warming. But there is evidence now to shake us out of complacency. Scientists from the University of California, Merced, have shown that irrigated fields have their limits in masking effects of greenhouse gas emissions. Specially, when land under agriculture isn't going up and global warming is getting abetted by a host of factors. The scientists also suggest that studies linking irrigation to climate change be accompanied with those dealing with effects of land use change.

Celine Bonfils and David Lobell of the University of California's School of Natural Sciences observed temperature and irrigation trends in California between 1915 and 2000. Irrigation-induced cooling in the top irrigated state in the us with 3.3 million hectares was palpable between 1915 and 1979, they observed.This was the period when land under irrigation more than doubled in California. "But in comparison, there was no clear effect of irrigation on temperatures over 1980-2000 when there was no net growth of irrigation," Bonfil and Lobell said. Their paper was published in the Proceedings of the National Academy of Sciences (Vol 104, No 34).

Studies did try to find the contrast between pre- and post-irrigation temperature trends but they did not document the rate of irrigation growth. This lack fostered a certain amount of smugness about irrigation's cooling effects. "Our results in California suggest that the rate at which irrigation evolved, and not just the presence of irrigation, explains the cooling effect and its attendant effect on global warming better," the scientists say.
Day temperatures declined by 0.14c to 0.25c per decade, during the period when irrigation was at its peak. The scientists attribute this to the enhanced cooling as a result of soil moisture evaporation. But they note that "the expansion of irrigation has had almost no effect on night time temperatures". In making this disclaimer, the University of California scientists were also contradicting earlier work which linked irrigation to the rise in California's minimum temperature. "An increase in greenhouse gases and urbanisation would best explain this trend, which exceeds what is possible from natural climate variability alone," Lobell said. In other parts of the world where irrigation development has been rapid, including Thailand, the Aral Sea Basin and Nebraska (the second most irrigated state in the us), Lobell and Bonfils found the same cooling effect in daytime maximum temperatures. But they were a little unclear about India, Pakistan and Eastern China, because of the presence of aerosols in the atmosphere that also contribute to the observed cooling by reflecting or absorbing sunlight. The authors note "In most of the intensively irrigated regions of the world such as Asia, growth in irrigation has recently decelerated and is projected to slow even more in the future."
Not all scientists, however, agree on irrigation's cooling capacities. "Several factors need to be taken into consideration. For example, if irrigation under paddy increases, it will cause a rise in global warming. Simply because more irrigation of paddy fields will release more methane," says a scientist associated with the Snow and Avalanche Study Establishment, Chandigarh.

A K Gosain, who works on hydrological cycles at the Indian Institute of Technology, Delhi, however agrees with the University of California scientists. "Irrigation has an impact on the micro-climate. If the water status of the local area is high, there will be higher evapo-transpiration and the relative humidity of the place will be higher. The temperature of that place will dip to some extent, but it has a very regional effect," he explains.

The Bonfils and Lobell study has shown that irrigation is an important variable but in a constellation of factors. So, it might not be able to bail us out of global warming. In California, for example, irrigation expansion is on the wane with an increase in urbanisation and increase in water demand from other sources. In the us, irrigation has decreased by 2 per cent between 1998 and 2003.

Bonfils summed the issue aptly when she told the media "Throughout the major irrigated regions of the world, the cooling influence of irrigation on daytime maximum temperatures will be much smaller in the next 50 years than in the past century, and irrigation will not continue to curb the effects of greenhouse warming anymore."