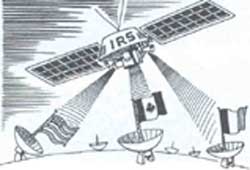 The Department of Space (DoS) will sell Indian Remote-sensing Satellite (IRS) data to the US-based Earth Operation Satellite Company (EOSAT), jointly owned by the Martin Marietta Company and Hughes Aerospace. This data will then by distributed by EOSAT to several user agencies within the US.

Following an agreement between DoS and EOSAT, the latter, whose clients include the US National Aeronautics and Space Administration (NASA), will also establish ground stations in other countries for receiving IRS information. DoS would also provide ground receiving systems and data processing software. According to B K Dikshitulu, director of the Hyderabad-based National Remote Sensing Agency (NRSA), which processes IRS data, Italy and Canada have also shown interest in establishing ground stations for receiving IRS data. Dikshitulu says the hardware developed and supplied by NRSA were tested and were functioning effectively.

The agreement drew positive responses in India. Says U R Rao, chairman of Antrix (the marketing wing of Indian Space Research Organisation) and member of the Indian Space Commission, "I am hoping that these kinds of understandings will remove export restrictions over a period of time." This was echoed by India's ambassador to the US, Siddhartha Shankar Ray, who felt the agreement harkened an era "of renewed and extensive scientific, technical, educational, cultural and defence exchanges between the two countries". Industry magazine Space News commented: "While India's satellite and launcher programmes could eventually threaten US share of these markets, keeping India at arms length is not likely to alter that possibility."

The deal became possible following the loss of the US LANDSAT-6 satellite, immediately after its launch on October 5, 1993. EOSAT examined the data from IRS-1A and 1B and appeared impressed with the quality. It also recognised that IRS-1C, scheduled for launch in mid-1995, was as good at the next generation of US and French satellite systems.