Is environment on the agenda?

With a recession-hit economy to revive, it remains to be seen how much priority the environment will get when the new administration takes over in Washington. 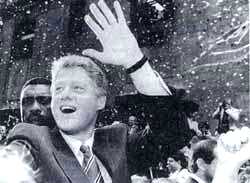 THE BILL Clinton-Al Gore team, as expected, put the Democrats back in power in the US after 12 years. Gore, the vice president-elect, has been widely acclaimed as a "sincere environmentalist" and his book, Earth in the Balance, is seen as one coming straight from the heart. But exactly how far the new duo will be able to push these concerns when they take over on January 20 remains doubtful. The single element of the Clinton-Gore group during the campaign was the revival of the tottering domestic economy -- not foreign policy or the environment.

Clinton rallied, like his opponents, to say that he and he alone would stimulate economic growth, expand investment and cut the deficit. The Republicans have been quick to cash in on the contradiction. President George Bush, referring to the movement to save the spotted owl by banning logging, said given Gore's role as "an environmental extremist, we will be upto our necks in owls and every man out of work."

Gore has ducked the question, saying only the difference between jobs and environment is a "false choice." Pushed to a corner, the Democratic team has argued that you can get richer and save the environment. In Michigan, facing autoworkers anxious about losing jobs because of higher fuel efficiency standards, Gore replied that there were jobs in new products that were environmentally friendly. In California, when he said that he favoured a complete moratorium on offshore drilling, he was charged with costs thousands of lives. Gore amended his statement post-haste, saying he wanted the suspension only in environmentally sensitive areas.

The toughest battle is with farmers who, faced with a glut and falling prices, are desperate for a bonus. Bush played to their vote when he relaxed environmental regulations to allow ethanol -- maize-derived alcohol -- to be used as an additive in petrol. The move thrilled farmers with a new lucrative market. But it angered environmentalists as ethanol-mixed petrol is found to increase smog. Interestingly, Clinton, when campaigning for the same vote, also chose to take sides against clean air and told farmers that he would find a way to use ethanol "as part of our nation's energy security future."


But the farmers and miners have, on the whole, remained wary of the environmental lobby that they see as supporting curbs on grazing, mining, oil exploration and hunting. Bush tried to woo them further by proposing to allow coal mining in protected national parks. But the move was blocked by Congress in the final days of his administration. But the owners -- mostly private energy companies -- are furious as over 16 per cent of the country's coal remains trapped under the protected lands. The conflict will pass on to Clinton and Gore.

In the shadow of the recession-hit economy, global affairs took a back seat in the election. Although it came a few months after the Rio meeting, the candidates had little to say about global warming, biodiversity and absolutely nothing to comment about environmental aid or technology to developing countries. Gore, in an obviously politically-sharp move during the campaign, made no reference to overconsumption in the US or even its role in creating global environmental problems.

In terms of actions, the Democratic manifesto goes only a few steps beyond their opponents' on an issue like global warming. Whereas Bush even refused to consider energy cuts, the Democrats have called for carbon dioxide emissions to be limited to 1990 levels by the year 2000 - a step that would allow them to keep polluting the atmosphere in very good measure.

In his book, Gore proposed an environmental "Marshall Plan" and various new taxes to promote conservation. But even Gore's campaign manager has gone on record distancing himself from the proposals, saying they were only a "series of ideas to be thought about and contemplated" rather than acted upon. Gore has preferred to keep quiet. And, when needled on the issue by Dan Quayle in a public debate that the proposals would "put an impossible burden on Americans in difficult economic times," Gore responded: "There is no such proposal. What I have called upon is a cooperative venture with Europe and Asia."