Is Ganga losing its resilience? 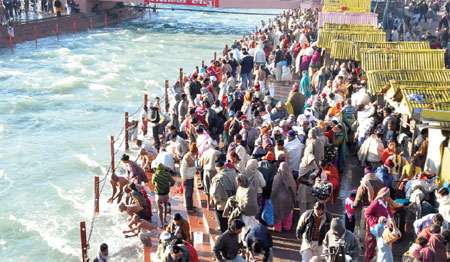 OVER A century ago in 1896, British physician E Hanbury Hankin reported in the French journal Annales de l’Institut Pasteur that cholera microbes died within three hours in the Ganga water, but continued to thrive in distilled water even after 48 hours. He had collected samples from below the bodies of cholera victims thrown into the Ganga. But several pathogenic bacteria now thrive in the river. The number of E coli is the highest among those posing threat to human health.

Researchers from SBS Institute of Biomedical Sciences and Research, Dehradun, and Hemwati Nandan Bahuguna Garhwal University studied a 440 km stretch of the river in Uttarakhand. The first study analysing the bacterial diversity of the Ganga found 43 species. E coli was the most prevalent followed by Enterobacter, Streptococcus faecalis and Pseudomonas.

“The study shows the Ganga has a high diversity of heterotrophic bacteria (that cannot synthesise their own food). The bacterial diversity was found to be distinctive at the sites where human interference was low, while enteric bacteria (that occur in intestine) dominated the areas where human population and religious activities were higher,” said Piyush Pandey, one of the researchers. The high number of E coli highlights the risk river faces due to rise in population, industrialisation and unsustainable development, the authors noted in the study published in the December 25 issue of Current Science.

Does high number of pathogenic bacteria mean the Ganga is losing its purifying touch? No, thinks D S Bhargava, former professor of environment at IIT Roorkee. “E coli indicates the presence of human faecal matter. It has nothing to do with the self-purifying abilities of the Ganga,” he said.

But there is something special in the Ganga. This is why its water does not putrefy when stored.” He noted there is a mysterious volatile material that exists only in the Ganga’s bed. “What it is nobody has been able to find,” he added.

A study conducted by C S Nautiyal, director National Botanical Research Institute in 2009, showed the recent samples of the Ganga water are more effective in killing pathogens. A particular strain of E coli could survive for three days in a three-day-old sample of Ganga water. The bacteria survived for seven days in the sample collected eight years ago, while it lasted for 15 days in a 16- year-old sample. The E coli survived for longer time in boiled water.
Science & Technology Water Quality Water Pollution Uttaranchal (Uttarakhand) Micro Organisms
Donate Now