ISRO gets set for MOM's day out

The orbiter would be taken to Mars in two steps—in the first, it will be taken to the Earth's orbit 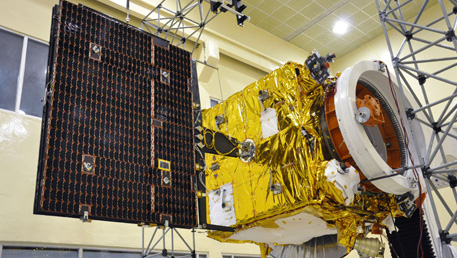 Indian Space Research Organisation (ISRO) is all set to send off an orbiter to Mars on November 5 at 2.38 pm. The countdown for the launch of Polar Satellite Launch Vehicle (PSLV), the launcher which would carry the orbiter to the parking orbit around the Earth in the first step of the Mars Orbiter Mission (MOM), started at 6.08 am on November 3.

The 56.5 hour-long countdown is for ISRO scientists to get the launcher and the orbiter ready. The launcher would be filled up with liquid fuel needed for the second and fourth stage of the launch. The scientists would also check the health of launch pad, ensure readiness of ground stations and monitor weather conditions. The launch would be initiated after the mission director for PSLV, P Kunhikrishnan, gives a command. This would be 15 minutes before the launch and would set in motion the on-board computer which would take over and launch the orbiter. The organisation has time till November 19 to send off the launcher—if the rocket is launched during this time, it would require the least energy to take the orbiter from Earth to Mars.

The government formally recognised Mars Orbiter Mission last year and allocated funds for it in the Union Budget in March. On August 15,  the prime minister announced from the ramparts of the Red Fort that India would venture to the red planet. In less than 20 months, scientists and researchers at ISRO got the orbiter ready—fitted with five instruments that would study the planet. (See infograph: 'Out of this world')

The orbiter would be taken to Mars in two steps. In the first, PSLV will carry the orbiter to the Earth’s orbit and release it. In the second step, the orbiter, after travelling in space for nearly 300 days, will be injected into the orbit of Mars. ISRO scientists say that the inbuilt autonomy would ensure that it can continue the journey on its own with minimum control from the ground station. During the launch, the rocket would be monitored from around the world. The observation stations include Port Blair, Brunei and Brazil. Two Indian ships have also been posted in the South Pacific Sea. The ships, Nalanda and Yamuna, have been leased from the Shipping Corporation of India and equipped specifically to help with the observations. PSLV was earlier scheduled to be launched on October 28, but it was delayed as one of the ships failed to reach its destination because of bad weather.

With this launch, India would become the sixth country to attempt a journey to Mars. If successful, it would be the fourth country to accomplish the feat.

India’s Mars mission has a well-defined agenda—to ensure that it has the capability to reach Mars and that it can carry out studies there. “The Mars mission would lead to excitement and enrichment of knowledge. This is why we study science,” says K Radhakrishnan, chairperson of ISRO.