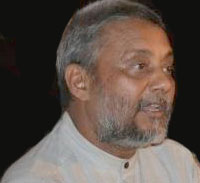 No religion was as sensitive to rivers as Hindus in the past. Our practices have changed under the influence of western culture. We still treat rivers as goddesses.

Some 2,500 years ago, Kumbh was shifted to Haridwar from Prayag. It was an occasion for meeting of kings, their subjects and religious persons to decide how to live with rivers and what would be the probable future actions plan to keep rivers clean.

Now, the Kumbh is a mass “bathing in the hope of attaining emancipation”. Hinduism, or any other religion, has nothing to do with pollution of rivers. If one wants to look at the matter through the prism of religious, then we should peep into our past to know who initiated it. In 1832, Hawkins, a British administrator, had issued orders to connect sewerage lines to river. It was the first such state order still preserved in the archives of Varanasi.

The profit-making mentality of modern society, which we have been aping, is  destroying our rivers and other natural resources.