It wasn't the asteroid 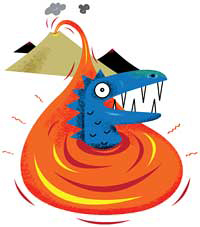 HOW did the dinosaurs disappear from the face of this earth? One school of thought blames it on volcanic eruptions from the Deccan Traps of India. Another insists on an asteroid that hit the earth aeons ago. One of the longest running debates in scientific history, freshly found evidence has fuelled it anew.

The Chicxulub crater that was discovered in the 1970s in Mexico, is quoted as an example of the asteroid theory. A study of the crater by proponents of the volcanic theory, said it pre-dates dinosaur extinction by 300,000 years. Gerta Keller of the geosciences department at Princeton University, usa, and her team sampled the soil at every 10 cm depth from sites around the crater.

The team found that the layer of K-T boundary (denoting the period between the Cretaceous and Tertiary eras when dinosaurs went extinct) with its iridium-rich soil lay above the asteroid impact layer and the two were separated by sandstone deposits. Fossils of the same plant species were found in both the layers which indicates life continued even after the asteroid hit and after the sandstone was deposited. This, contradicts the asteroid theory. If the the asteroid had caused extinction, the next layer of sediments would have shown a different set of fossils, said the study published in the Journal of the Geological Society (Vol 166, 2009).

Another point of contention was the iridium layer. This is a characteristic of K-T samples across the world. Pro-asteroid scientists believe that since iridium is found in low concentrations in the earth's crust, the source is extraterrestrial. Keller said: "Iridium is common in the Earth's core and brought out by powerful volcanic eruptions. From here the iridium is distributed around the world by winds. Chicxulub shows no volcanic activity but the iridium in the K-T boundary here could be from the Deccan eruptions."

The debate goes on. Peter Schulte at the institute for geology and minerology, University of Erlangen-Nuremburg, Germany, and an asteroid theory proponent, said, "They studied only a few sites. Areas outside the Gulf of Mexico show the K-T boundary and the Chicxulub impact are correlated. The composition of rocks and the dramatic loss of species provide the proof."