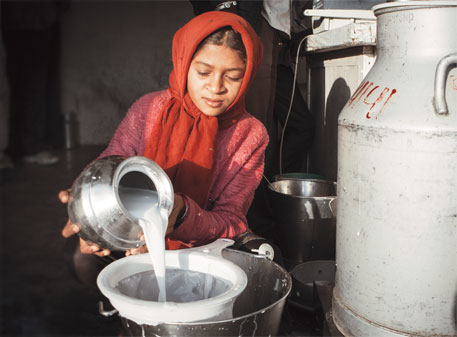 India’s dairy sector, which is growing at a very fast rate, making the country the world’s largest producer of milk, is attracting top companies to capitalise on the opportunity generated from the sector. Tobacco-to-hospitality conglomerate ITC Ltd is the latest to join the fray.

“We are not new to the dairy sector,” says Amarjeet Singh, manager of ITC’s dairy project. “We have been working with dairy farmers in Munger in Bihar as part of our integrated animal husbandry programme under the corporate social responsibility (CSR) initiative for the past five years. Now we plan to use our experience and take a plunge in the dairy business.”

To begin with, ITC will produce milk powder. The conglomerate is setting up a milk processing plant on 6.4 hectares at Munger, which is expected to be ready by the end of the year. The state government has given the land on lease to the company. The plant will receive milk from the 5,000-odd dairy farmers from 250 villages covered under ITC’s CSR initiative. These dairy farmers now sell their milk to Bihar’s state milk cooperative, which markets its products under the brand name, Sudha Dairy. “The milk powder will be initially used in-house by our food division that makes biscuits, staples, snacks, noodles and confectionery,” says Singh. ITC, which aims to become a pan-India dairy entity, will subsequently scale up its dairy business.

Before expanding its business, the conglomerate is strengthening its dairy farmers’ base by collecting milk through cooperative model, spreading awareness about animal husbandry among the farmers and extending them veterinary services so that their cattle produce more milk.

ITC’s foray into the business is expected to give competition to brands of other conglomerates such as Britannia and Nestle that dominate the organized dairy sector as well as to cooperatives such as Amul and Sudha Dairy. But officials associated with Bihar’s state milk cooperative have welcomed the competition. “Competition always helps the producers,” says a highly-placed official with the cooperative. “We buy milk (4 per cent fat) at Rs 25 from the dairy farmers. They will sell their produce to ITC only if the company pays them more. This will ultimately help improve the socio-economic conditions of dairy farmers and attract more people to join the sector. After all, dairy cooperatives were set up to achieve this objective,” he adds.