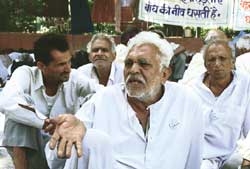 construction work on the Sardar Sarovar Project (ssp) on the river Narmada has resumed after two-years. On March 8, 2006, the Narmada Control Authority (nca) cleared an increase of 11.28 metres in the Narmada dam's height -- from 110.64 metres to 121.92 metres. The following day, the Sardar Sarovar Narmada Nigam Limited (ssnnl) initiated construction work on the dam. But the Union government maintains it has put the construction on hold.

Two days after nca gave the go-ahead to raise the dam height, Saifuddin Soz, Union minister for water resources and the chair of the Review Committee of the Narmada Control Authority (rcnca) said the clearance given by the resettlement and rehabilitation (r&r) sub-group of nca to raise the dam height was "premature" and so it has been put on hold. "I am not satisfied with the present level of resettlement and rehabilitation work. I need a credible commitment that the action taken reports (atrs) would be verified by the gram panchayats, " Soz said.

But at the dam site in Kevadia Colony, central Gujarat, construction work was in full swing (when this report was filed on March 22). Officials of ssnnl -- the Gujarat body in charge of the dam construction -- say they are yet to receive any instructions from the Union government to halt the work.

The local people and the Narmada Bachao Andolan (nba) have once again raised their voice. Over 120 representatives from the Narmada valley are on an indefinite dharna in front of the Union ministry of water resources' New Delhi office since March 17.

"The ongoing construction is in contravention of the Narmada Water Dispute Tribunal Award (nwdta) and the Supreme Court's (sc's) judgement, which require complete rehabilitation before submergence," says Medha Patkar of nba. The fact that work is continuing despite the objection raised by rcnca puts the future of rehabilitation work in jeopardy.

More than 30,000 families in three states -- Gujarat, Madhya Pradesh and Maharashtra -- are going to be affected. "At least 177 villages will be inundated and 24,421 families will be ousted in Madhya Pradesh alone," says Patkar. Fertile lands, houses and properties including schools, dispensaries and shops will also be submerged.

"Resettlement of another 30,000 families is a distant dream, particularly when resettlement issues related to the 11,000 families displaced during the past stages of the dam construction are yet to be resolved," says Dipti Bhatnagar, an nba activist.

The r&r sub-group of nca cleared the increase in the dam's height following claims by the three states that rehabilitation of all the project-affected people have been done and atrs have been submitted to the Centre for clearance. But hardly any atr has been made public or sent to the gram panchayat s , alleges nba. The Panchayat Extension to Schedule Areas Act, 1996, which is applicable to the entire Sardar Sarovar submergence area, mandates that consultations should be held with each gram sabha -- once before the rehabilitation plan is finalised and then after rehabilitation has been carried out.

Incidentally, nca went ahead with its decision without seeking the Maharashtra cabinet's clearance. In January 2004, Maharashtra government had decided that any further decision to raise the dam's height would be taken by the state cabinet.

Meanwhile, the Madhya Pradesh (mp) government has begun doling out cash compensation instead of land, despite the Centre's clear directives against such doles. The nwdta and the sc's directives also stipulate that "the affected people should be rehabilitated with cultivable and irrigable land". But the mp government says the state has no cultivable land to offer.

Even the disbursement of cash compensation has not been satisfactory. "Only 50 per cent of it has been disbursed," alleges nba. The r&r sub group of nca is the foremost authority to assess if the rehabilitation process complies with nwdta and sc's directive. "But no member of the body has visited the submergence area, after November 2000," alleges Patkar.

Meanwhile, in February 2006, the affected families in the Narmada valley approached sc, challenging the cash compensation. The matter has yet to come up before the apex court, but nca has cleared the raise in the dam's height. As nba alleges, "this decision has pre-empted the affected people's petition.