It’s a blue sunset on Mars! 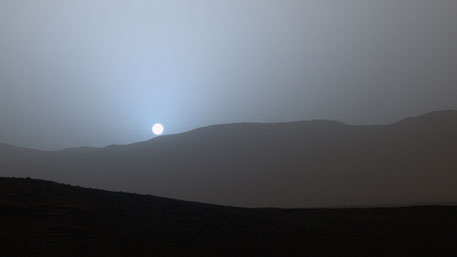 The Red Planet witnesses a blue sunset, reveal photographs released by the National Aeronautics and Space Administration (NASA). The agency’s Curiosity rover, which has been in the Martian orbit for close to 1,000 days, captured a series of stunning photographs of the sun setting on the horizon of the planet and sent it to NASA on April 15. The images were released to the public this week.

The bluish tinge of the sun is attributed to suspended dust particles in the Martian atmosphere. “The colors come from the fact that the very fine dust is the right size so that blue light penetrates the atmosphere slightly more efficiently. When this light scatters off the dust, it stays closer to the direction of the sun than the light of other colours does. The rest of the sky is yellow to orange, as yellow and red light scatter all over the sky instead of being absorbed or staying close to the sun,” Curiosity team member Mark Lemmon of Texas A&M University says in a report published on NASA’s website.

Just as colours become more dramatic in sunsets on Earth, Martian sunsets make the blue near the sun’s part of the sky much more prominent, while normal daylight makes the rusty colour of the dust more prominent, the report explains.

Curiosity was inside the Gale Crater on Mars—where it landed in August 2012—when it captured the sunset. Curiosity uses its Mastcam to take photographs of the Red Planet, which are transmitted to Earth in black and white with a Bayer matrix. This is a checkered pattern that indicates actual colour value so that the photos can be rebuilt in their proper hue.