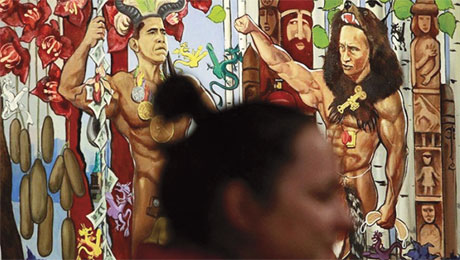 A canvas depicting Vladimir Putin and Barack Obama standing face-to-face getting ready to battle with their penises.

Glass cases with Soviet condoms and old Russian pamphlets on “women’s illnesses”. Titillation is not the objective of Moscow’s first sex museum, Tochka G (G Spot) but that’s exactly the reason it is drawing flak. Much of the nightlife in the Russian capital centres on brothels.

But when it comes to public discourse, sex does not exist. Alexander Donskoi, the museum’s founder, recognises this. “It is about freedom.” On July 6 he met a representative of the Moscow mayor’s office over concerns about the museum. Does he think it will be shut down? “They can do whatever they want,” he says.