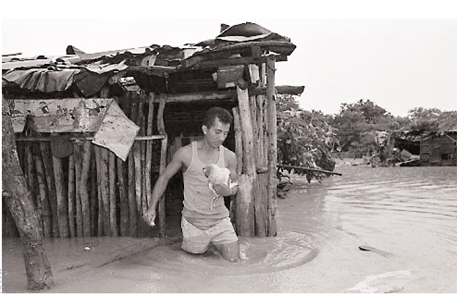 THE Galapagos archipelago off the coast of Peru supports a unique ecosystem with a large variety of plants and animals. The archipelago has witnessed abnormal weather conditions this season (summer in the Southern Hemisphere) that have been attributed to the phenomenon known as El Niño, which causes reversal of ocean currents in South Pacific Ocean. The rains, which normally arrive in February, began pounding the archipelago as early as November, when 147 mm of rainfall was recorded in a single month. The normally dry island of Española witnessed 204 mm of rainfall in only two days in mid-December.

The rain is forecast to continue till El Niño peaks in March. This has made the situation difficult for a host of native species (New Scientist, Vol 156, No 2116). Biologists say the high temperatures and rainfall that have accompanied El Niño will cause the populations of several species to crash. At its peak, El Niño causes the temperature to soar 3°C above the normal. They warn that this would help alien species, which have invaded the islands. They add that native species would not be able contend with them. “It’s going to be a catastrophe,” says Jennifer Stone of the Galapagos Conservation Trust, a UKbased charity. Michael Bliemsrieder of the Charles Darwin Research Station (CDRS) on the island of Santa Cruz says the outlook is grim. This year’s El Niño is estimated to be as strong as the one that devastated the western coast of South America in 1982-83. Rainfall in that season was six times higher than normal.

The number of flightless cormorants, a species unique to the Galapagos, had declined by 45 per cent. As much as 78 per cent of the rare Galapagos penguins had died and the winged albatross had failed to breed. Green algae that is eaten by the marine iguana was replaced by inedible red algae, leading about 70 per cent of the iguanas to starvation. The heavy rains had also triggered a rapid rise in plant growth that in turn encouraged the spread of introduced pests such as rats and fire ants. It is increasingly becoming clear that this year’s El Niño will cause wildlife catastrophe of similar proportions. The waved albatross, among other seabirds, has failed to nest this season. Red algae has already started replacing green algae. Hammerhead sharks have started moving to deeper, cooler waters. On the other hand, the land has already started blooming with a rich carpet of vegetation in most barren islands.

What is alarming biologists is that since 1983, alien species have become further established, and it is feared that they might inhibit the comeback of native species. Native species have managed to recover after El Niño years earlier. “Introduced species are by far the most serious threat to the biodiversity of the Galapagos,” says Robert Bensted-Smith, director, CDRS. Reports of invasion of cats, rats and goats in the Galapagos have been circulating for years. The more recent arrivals include two species of fire ants and an unpleasant biting fly. “Some islands are now completely infested with fire ants,” says Charlotte Causton, entomologist at the CDRS. “And the fly breeds in running water, so you can expect it to increase when there is more rain,” she adds.