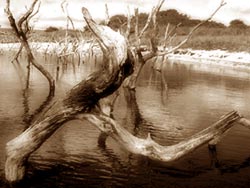 ecologists have long wondered why forests decline in the absence of catastrophic disturbances. A study, published in Science, sheds light on this issue.

During the study, an international team of researchers investigated natural forested stands across six 'chronosequences' -- sequences of soils of different ages since the most recent major disturbance. The 'study sequences' were located in a range of climatic zones, including the northern Sweden (a series of forested islands near Arjeplog), Alaska, Hawaii, eastern Australia and two locations in southern New Zealand. All the sequences consisted of forest stands on soils having a range of age: from those formed very recently to those at least several thousand years old; the oldest soils studied were 4.1-million-year old in Hawaii.

For all six sequences, forest biomass (mass of trees per unit area) increased initially as soil fertility increased. However, after tens of thousands of years, forest biomass declined sharply for all sequences to a level when some sites could no longer support trees. This happened even without any human interferences or natural disasters. The researchers surprisingly found that the decline in all the cases was due to reduced levels of the phosphorus available to the plants. As soils age, the phosphorus content of soil becomes limited because it is not biologically renewable in the ecosystem.

Conversely, nitrogen -- the other nutrient required by plants -- was found to be biologically renewable because atmospheric nitrogen can be converted by soil bacteria into forms of nitrogen that trees can use. Therefore, nitrogen limitation did not contribute to forest decline in these systems, contrary to popular views.

There was also evidence from the study that phosphorous limitation negatively affected soil organisms and reduced their potential to release nutrients from the soil to maintain the tree growth.

These results have several implications. Firstly, they show that major disturbances are necessary for rejuvenating forest ecosystems. In the absence of these disturbances, productive forests perpetuate indefinitely, thereby reducing the phosphorous content to a level in which the forests with a high standing biomass can no longer be maintained. The disturbances can vary for different forests, but can include wildfire, glaciation or volcanic activity.

The results also reveal that high biomass forest stands represent a transitional phase in the long-term (in the order of tens of thousands of years) and if they are left without major disturbances, then they are bound to decline.

Finally, the findings indicate that very similar patterns of decline and mechanisms behind the decline occur for very different types of forest throughout the world, spanning boreal, temperate and tropical climatic zones.