India publishes its first report on impacts of climate change 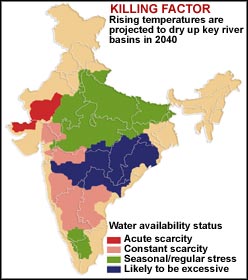 on june 21, 2004, the Indian government released its first 'National Communications' on climate change. It is the country's first 'official' document detailing the emission levels of greenhouse gases, and their present/future impacts. Under the United Nations Framework Convention on Climate Change -- to which India is a party to -- it is obligatory to prepare such an inventory.

As per the report, in 1994 -- the base year -- 1,228,540 gigagrammes (one million kilogrammes) of greenhouse gases were emitted from India, resulting in a per capita emission of about 1.3 tonnes. The document further notes that the rising temperatures have already taken their toll -- with global average temperature increasing by 0.4c in the past 100 years, there has been a 10-12 per cent increase in monsoon along the west coast, northwest regions and north Andhra Pradesh. But a decline of six to eight per cent has been observed over east Madhya Pradesh and adjoining areas, the Northeast and parts of Gujarat and Kerala.

Simulations of the future scenarios indicate there will be an overall decrease in the number of rainy days over a major part of the country. The decline will be greatest -- more than 15 days -- in the western and central parts. Such impacts will be most evident after 2040, when maximum temperatures may increase by 2-4c from the 1994 levels. Models, in fact, indicate minimum temperatures may also rise by 4c across the country. Such dramatic increases will result in more severe droughts and acute water scarcity (see map above: Killing factor).

The food insecurity is also expected to worsen, with rising temperatures making environs unfavourable for agriculture. Two scenarios have been simulated -- the pessimistic and the optimistic. Pessimistic scenario refers to a 'high' increase in temperature and a 'low' rise in the levels of carbon dioxide (co2). The optimistic scenario refers to a large increase in co2 levels, but not a dramatic change in temperature levels. As per the modelling, wheat yields in central India are likely to suffer a drop of up to two per cent under the pessimistic scenario. But there is also a possibility that yields may increase by six per cent if the global change is as per the optimistic scenario. The forest ecosystem would be worst affected -- by 2050, about 70 per cent of the vegetation is expected to be less suitably adapted to its location, making it more vulnerable to biotic stresses.

The report concludes by stating that comprehensive planning is required to ensure that least percentage of the population is affected. "At present, we practically have no policies related to adaptation and mitigation. This is because very few officials understand the grim reality. Such reports will help plug in the gaps," says Subodh Sharma, national project director, National Communications Project, Union ministry of environment and forests.