It's official: politicians are polluted! 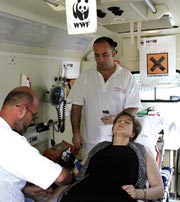 One sad reality often mirrors another. Environment and health ministers from 15 eu countries have been proved to be contaminated, albeit by industrial chemicals.

Results of a survey undertaken by the World Wide Fund for Nature show that the average minister carried 37 highly toxic chemicals, including pesticides and flame-retardants, in his/her blood. Although the effects of these chemicals are not known very well, they are persistent, bioaccumulative and capable of harming the endocrine system. The exercise was aimed at building support for a proposed legislation to test and license several commonly used chemicals. The European chemicals industry has voiced strong opposition to the legislation.