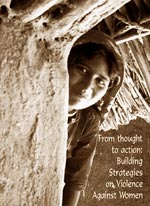 Some might chidingly dismiss this publication as 'feminist-type', but any reader would learn a lot about how violence against women works subtly in society, and what kind of strategies could combat this phenomenon. From Thought to Action is a research report released by New Delhi-based Kriti. It is the outcome of a year-long analysis of, and reflection on, issues of violence against women, especially physical violence, across 8 villages and 3 slums in different parts of India. The book is divided into three sections. The first presents research methodologies adopted; then there is a perspective on the issue, based on field-based findings. The final section provides strategies to come up with programmes to counter violence. Researchers reveal that violence is 'routinised' and taken to be 'normal', not just by women and men, but also by local institutions -- the panchayat, health centres.

The report becomes very interesting when it delves into the minds of women, men, the police and local leaders to understand what violence against women means. This part of the report goes beyond the general notion of violence -- as only physical abuse -- to the emotional and psychological aspects of what may be called everyday-life torture. It discusses 'good' and 'bad' women and 'wifely duties', all social constructions. For instance, during discussions many women said: "If a woman knows her husband prefers his food on time then she should make sure that he gets it on time. Why can't she adjust her time accordingly?" Some claimed "if a woman assaults her husband she will go to hell". The police, on the other hand, mostly regard rape as a 'consensual' act by women, or a false report conjured to settle a score. Panchayat meetings prefer to discuss toilets and taps to domestic violence.

So how should such violence be combated? Dialogue, for instance, is an important tool. Here, the role of non-governmental and grassroots organisations becomes imperative. Training is an important part of the exercise. The book stresses on the need of donor agencies to factor gender sensitisation into their projects, since women are the fulcrum of development.